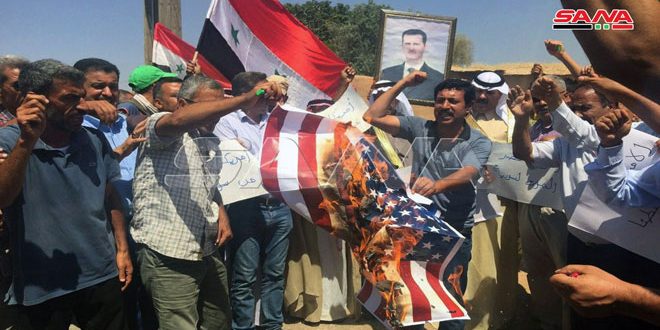 HASAKA, (ST)_ Hundreds of residents of Tartab village in Qameshli countryside protested on Monday against the illegitimate presence of the U.S. occupation forces in the region, according to the Syrian News Agency (SANA).

The agency reported that the protesters burned the US flag and demanded the exit of the occupation forces from Syria and putting an end to their acts.

The protesters also condemned the coercive economic measures being imposed on the people of Syria, raising banners that call for stopping the looting of the Syrian oil by the U.S. occupation forces and their tools.

“The Syrian people will not rest until the U.S. occupation forces exit and the Syrian lands are liberated,” the protesters said.

Several areas in the Syrian al-Jazeera have witnessed protests against the illegitimate presence of the US occupation forces, who plunder the Syrian oil and wealth in collusion with their tools there.

French diplomat Michel Raimbaud, “Beyond the pandemic, geopolitics as usual”...