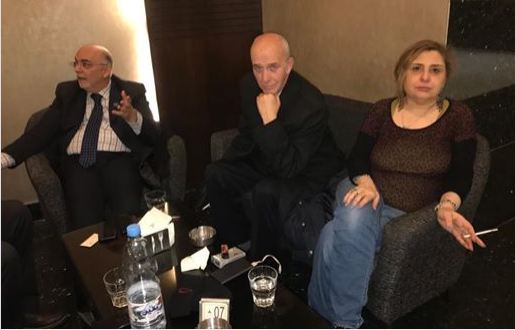 A highly reliable source says that there is a group of Russian officials within the Kremlin that employs important leverage for Israel within the Russian leadership a state within a state , and that this group has serious financial ties with a number of extremely wealthy Russian Jews
who had financially gained their fortune during the collapse of the former Soviet Union and the chaos that prevailed , during which They managed to purchase a considerable number of real estate and factories and modernizing them through their relations with Lord Rothschild and others .

The tycoons use their financial position to pressure the inner circle close to Putin, and they have offered financial rewards to the Russian hierarchy.
Their main goal is to prevent Putin from making pro decisions regarding the support of Syria, and to prevent him from taking a solid position on the deal of the century, and our source says: The momentum and increased pressure is stepping up and conspiring against Putin

Deliberately sabotaging the Russian-Syrian relationship, and these corrupt officials associated with the financial and political Zionist supported lobby coordinate their moves from Moscow with Netanyahu’s office directly on a daily bases

That this escalation has reached a very dangerous stage (as the sources say. preparations are under way to launch operations against the Russians in Syria, and accusations will be made against Syrian intelligence agencies (false flag operation)

Netanyahu’s office asked an important media coordinator in the United States to start a media campaign to heighten tensions in relations between Bashar al-Assad and President Putin,

In preparation for this. The source says: This group has been detected by other officials who are beginning to raise their suspicions about its subversive role in the relationship with Syria because this would harm the Russian national interests in the end.
The source says: Putin’s decision to send a special envoy to Syria to discuss commercial and financial issues is closely related to what this group is doing, and it is worth noting that American and Turkish soldiers destroy the wheat harvesting in Syria, by burning the wheat fields, especially in the northeast), threatening Syrian food security,

Copying the Israel play book to destroy the fish, honey, strawberry and grape crops in the Gaza Strip.

Putin is angry: Our source says: – A number of Russian officials, and some members of the Supreme Federal Council raised this with President Putin and alerted him to the dangers of what Israel proponents are doing .

Putin was furious and when the first opportunity came,
Putin took a firm stand with no hesitation , and responded to these actions , because the official position announced quickly by Moscow on Trump’s decision to end some of the countries in their trade dealings with Iran,

Putin renewed the rejection of the American blackmail with Iran and assured that these sanctions would not affect Moscow’s position (and Iran has a position on the century deal and the Israeli aggression), but our sources say that a number of Officials are demanding a firm stand on the Israeli government’s decision to annex the West Bank and the Jordan Valley, in violation of international law, international legitimacy resolutions, and Resolution 242.

The sources say that a firm stance is expected to be issued from Moscow after the special envoy who was dispatched to Tel Aviv in an attempt to persuade Netanyahu to back down on his decision,
And the source added that the answer appears to have come through Netanyahu’s assertion to move forward with the annexation, and by imposing serious measures against the Authority and its president Mahmoud Abbas,
the deployment of additional forces, and the distribution of weapons to all settlers. Putin is also angered by Trump’s announcement that he will impose sanctions on Russia and China North Stream 2 project.

At this moment Russia wants to extend its bases inside Syria, which both the west and Tel-Aviv do not want to see happen for tactical reasons