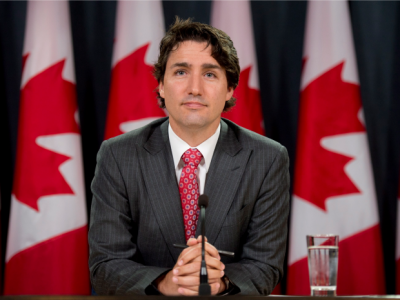 “Reverse Projection”, as described by Canadian professor John McMurtry, is a staple of propagandists as the imperial West imposes its toxic agenda of war and poverty domestically, and throughout the world.

Public Relations liars are the new myth makers who create the new stories to sell to an increasingly anesthetized public.

All of the lies serve to entrench the transnational oligarch class and to deny wealth, freedom, democracy, and Life itself to the rest of us.

Canada’s governing party, the Liberals, led by the ever charismatic Justin Trudeau, is a perfect front for a criminal agenda where black is sold as white, and white is sold as black.  The Liberal party will have a long tenure.

Justin Trudeau’s defense of the sale of military equipment to Wahhabi Saudi Arabia as a matter of “principle” will no doubt solidify his glowing reputation.

Not only is Wahhabi Saudi Arabia a chief financier for NATO’s criminal terrorist proxies who are chopping their way through theMiddle East and Africa, but its degenerate ideology, a deformed misinterpretation of Koranic teachings, will also continue to flourish, thanks to countries like Canada, that grow and sustain the spiritual cancer, to the detriment of humanity, and the benefit of the few.

“By 15th June this year executions reached one hundred ‘far exceeding last year’s tally and putting (the country) on course for a new record’ according to The Independent (15th June.) The paper adds that the Kingdom is set to beat it’s own grisly, primitive record of one hundred and ninety two executions in 1995.

The paper notes that: ‘ …the rise in executions can be directly linked to the new King Salman and his recently-appointed inner circle …’

In August 2014, Human Rights Watch reported nineteen executions in seventeen days – including one for ‘sorcery.’ Adultery and apostasy can also be punished by death.”

It gets better.  Arbuthnot explains:

“At home women are forbidden: ‘from obtaining a passport, marrying, traveling, accessing higher education without the approval of a male guardian.’ (HRW Report, 2014.) Saudi is also of course, the only country in the world where women are forbidden to drive.”

The Axis of Evil, to which Canada so willingly belongs, includes Apartheid Israel , the Persian Gulf monarchies, and the US-led NATO terror organization. Each of these polities has declining rights and freedoms at home which serve as a foundation for the destruction that the Western Axis spreads globally, largely beneath the radar of domestic public perception.

The “matter of principle”, as described by Trudeau, is like a “code of honour” between arms-trafficking mafia clans. The “principle” being honored will be instrumental in the deaths of more innocent people in Yemen , Syria, and beyond.   It will also be an instrument for Wahhabism, and against democracy and the rule of law globally.

If, god forbid, the West’s terror proxies win in Syria, then the democratic government of Syria will be replaced by a barbaric puppet regime beholden to the West.

Fortunately, the Syrian people have witnessed the depravities of the West’s destruction of Iraq, its demolition of Libya, and its nazification of Ukraine, so they will be less likely to compromise with the forces of evil that they are defeating at this very moment. Nor should they compromise.

In an article entitled “Syrian 2016 Elections Defy US and NATO ‘Regime Change’ Agenda,” Canadian peace activist Ken Stone describes his observations of the current Syrian elections in these words:

“On the walls of the buildings along the narrow streets were plastered hundreds upon hundreds of election posters. Over the streets were strung banners showing small and large groupings of well-dressed candidates representing each slate. Clearly, the 250 parliamentary seats were being hotly contested.”

After all, with the Canadian first-past-the-post system, the representation of political parties in the House of Commons in Ottawa bears little resemblance to their share of the popular vote. And, in Canada, we have, in effect, a two party system. Only the big business-friendly Liberals and Conservatives have ever held power in our country in 150 years.”

This isn’t exactly the “real change” that the public relations mandarins sold to Canadians.

The original source of this article is American Herald Tribune