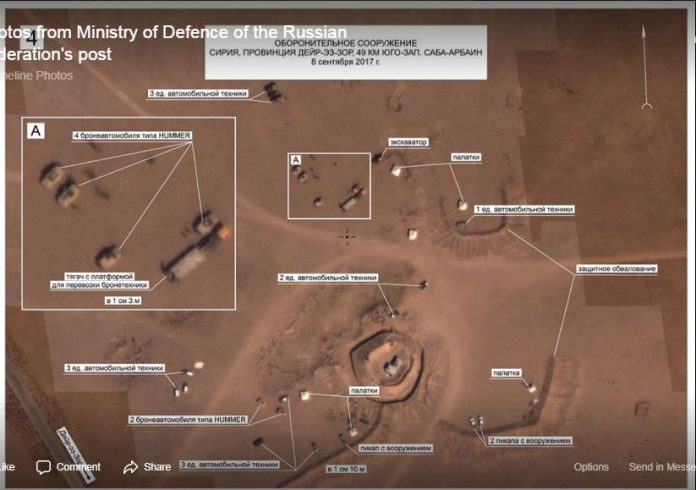 The Russian Defense Ministry has released aerial images allegedly showing ISIS, the SDF, and US special forces working side-by-side on the battlefield against Syrian and Russian forces in Deir el-Zour, Syria.

As Adam Garrie reports, via The Duran, it has long been thought that the US proxy militia SDF is operating in collusion with ISIS in various parts of Syria. This has especially been the case in respect of Deir el-Zour. In Deir el-Zour, the Russian Defense Ministry has previously stated that the Syrian Arab Army and their allies are fired on most intensely from positions known to be held by the SDF.

SDF militants work to the same objectives as Daesh terrorists. Russian drones and intelligence have not recorded any confrontations between Daesh and the ‘third force’, SDF”.

He added that Russia will not hesitate to target SDF forces that threaten the battlefield progress and personal safety of Russia’s allies, namely the Syrian Arab Army.

Other reports surfaced of US military helicopters airlifting known ISIS commanders to safety as the Syrian Arab Army made its advance on the former ISIS stronghold of Deir el-Zour.

All of this has happened as the US is moving its proxy Kurdish led SDF forces from Raqqa to Deir el-Zour, in a move that appears to be an attempt to stop Syrian forces from liberating their own country’s legally recognized territory.

Now, the Russian Defense Ministry has released a statement followed by 12 photos showing how SDF forces work alongside US special forces in ISIS-controlled areas without facing any resistance from ISIS. Furthermore, none of the US or Kurdish led forces even take defensive positions which indicate that they are cooperating with ISIS rather than engaging in a perverse truce.

In other words, the SDF, US special forces, and ISIS move among each other in the same manner as allies do.

The following is the statement from the Russian Defense Ministry on the matter:

Facing no resistance of the ISIS militants, the #SDF units are advancing along the left shore of the #Euphrates towards #Deir_ez_Zor.

The aerial photos made on September 8-12 over the ISIS locations recorded a large number of American #Hummer vehicles, which are in service with the #America‘s #SOF.

The shots clearly show the US SOF units located at strongholds that had been equipped by the ISIS terrorists. Though there is no evidence of assault, struggle or any US-led coalition airstrikes to drive out the militants.

Despite that the US strongholds being located in the ISIS areas, no screening patrol has been organized at them. This suggests that the#US_troops feel safe in terrorist controlled regions”.

This demonstrates that in spite of Donald Trump’s apparent wiliness to abandon the policy of aiding jihadist groups, not only has this policy not changed, but such a reality now includes full-scale battlefield collusion with ISIS.

This also helps explain why in June of this year, SDF forces allowed ISIS terrorists to peacefully leave Raqqa and head towards Deir el-Zour, a place which is now unquestionably the largest remaining ISIS stronghold in the east of Syria.

But now, not only are US proxies allowing ISIS to peacefully retreat, they are visibly coalescing on the battlefield. These realities also corroborate the story of SDF fighters being wounded in a Syrian led strike on known ISIS targets. As I wrote previously in The Duran, this is because SDF militants are fighting beside ISIS.

The fact of the matter is that the Kurdish led SDF and ISIS now share the same strategic goals, in spite of apparent ideological differences. Both seek to aggressively and illegally prevent Syria from liberating her sovereignty territory and in so doing, both are challenging the territorial unity and integrity of the Syrian Arab Republic. Likewise, each group’s ideology is opposed to the Arabist Constitution of Syria, seeking instead to lay the groundwork for sectarian ideologies in the areas they seek to illegally annex.

Most worryingly, both militant groups are clearly collaborating and colluding with each other and with the United States, in a proxy war against Syria and the interests and safety of her allies, including Russia and Iran.

What once was only partly clear, is now as clear as the following color photographs from the Russian Defense Ministry.

The images released by the Russian Defense Ministry encourage speculation that the US and SDF forces have some sort of “understanding” with IS terrorists operating in the region, according to Ammar Waqqaf, the director of the Gnosos think tank.

“From the footage, the Americans seem to be, and the SDF seems to be quite at leisure, they are not expecting any attack anytime soon,” Waqqaf told RT.

The reason why this may be the case is that there has been some sort of understandings with ISIS over there. Probably they were given some amnesty, that they are not going to be prosecuted, … or they were given guarantees that they would not be given back to the state.”

The SDF, ISIS and the United States are fighting on the same side of the conflict in Syria, it is the side of terrorism which seeks to destroy the secular, modern, pluralistic and independent Syrian Arab Republic.

Earlier in September, Russian Defense Ministry spokesman Major General Igor Konashenkov accused the SDF of collusion with ISIS terrorists. “SDF militants work to the same objectives as IS terrorists. Russian drones and intelligence have not recorded any confrontations between IS and the ‘third force,’ the SDF,” Konashenkov said.

This proves that the Hollywood actor Morgan Freeman was correct. The US and Russia are at war, albeit a proxy war which includes ISIS.

An open letter from Syrian Priest to his holiness Pope Francis: Damascus awaits you

“Under the pretext of Fighting ISIS”/By Ibrahim Mohammad﻿