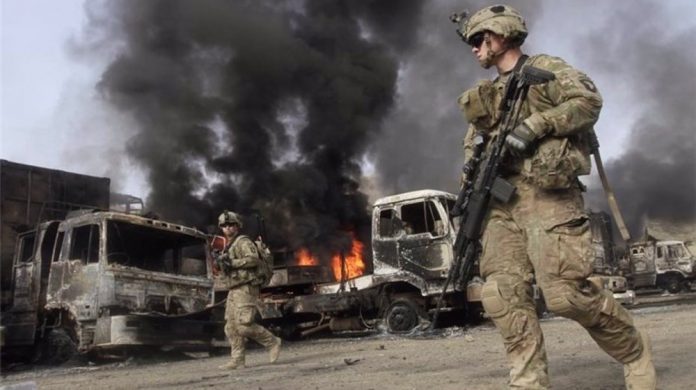 Empire’s support for Daesh/ISIS/al Qaeda in Syria is not an isolated policy. It is the rule rather than the exception. The so-called “Caliphate Project” is a CIA project.

Washington is governed by invisible sinister lobbies, not politicians. Canada too is a vassal of these lobbies, now more than ever. — Mark Taliano

Russia says US, NATO colluding with Daesh in Afghanistan

Former President Hamid Karzai was the most ranking Afghan official to announce first that the US was allowing Daesh to flourish in Afghanistan.

Russia has revealed collaboration in Afghanistan between US and NATO forces and Daesh terrorists, specifically pointing to the use of unmarked supply helicopters in Daesh-infiltrated areas where the country’s air space remains under the complete control of the US-led forces.

“Russia is aware of unmarked helicopters conducting flights in areas, where IS (Daesh) militants were active, particularly in Afghanistan’s north,” Foreign Ministry spokeswoman Maria Zakharova said during her press briefing on Thursday.

“This is how terrorists received reinforcements and evacuated the wounded, as well as dead bodies,” Zakharova said.

“It would have been impossible to carry out such activities unbeknownst to the US and NATO forces that had complete control of Afghanistan’s airspace,” he said.

“We believe that this information is enough to draw conclusions about cooperation between the US and IS fighters,” the senior diplomat said, noting that Russia had already made the information it had public and that international organizations, including the United Nations, could use it for further probe into the matter.

Her remarks coincided with earlier statements by the director of Russian foreign ministry’s Second Asian Department, Zamir Kabulov, that Moscow had received information about specific facts related to the US-led coalition’s cooperation with Daesh in Afghanistan.

‘A failure’: Russia mocks logic of US conduct in AfghanistanRussia’s Foreign Ministry spokeswoman slams the US war in Afghanistan as a “failure,” insisting that Washington never reported to the UN Security Council on its conduct there.

“As for actual facts, we have repeatedly mentioned them. However, we don’t do it in a way typical for the Anglo-Saxon world, which includes the demonstration of test tubes to the UN Security Council that later turn out to be a hoax. We do it based on facts,” Zakharova said when asked whether Moscow would release details of interactions between the US and Daesh terrorists.

Daesh began establishing a presence in Afghanistan almost a year after making sweeping land grabs in Iraq and Syria in 2014.

Former President Hamid Karzai was the most ranking Afghan official to announce first that the US was colluding with Daesh in Afghanistan and allowing the Takfiri group to flourish in the war-stricken country.

The chief of staff of the Iranian armed forces, General Mohammad Hossein Baqeri, said in February 2018 that “after witnessing Daesh and other organized terrorist groups losing their ground in Iraq and Syria, the Americans are now relocating them to Afghanistan”.

US veterans: We lost, wasted blood in Afghanistan

The new revelations came as the US is winding down years of years of its occupation of Afghanistan.

Several veterans, cited by Reuters, insisted that the United States was defeated in both long-term military engagements in Iraq and Afghanistan, which they referred to as unwinnable wars.

“A hundred percent we lost the war,” said a member of the US Marine Raider special operations forces who fought in multiple battles in Iraq and Afghanistan, identified in the Reuters report as Jason Lilley. “The whole point was to get rid of the Taliban and we didn’t do that. The Taliban will take over.”

The 41-year-old veteran expressed “disgust” at American politicians and disappointment over “the blood and money squandered,” noting that his comrades were killed and maimed in wars he said were unwinnable.

“I don’t think one life was worth it on both sides,” Lilley said as he detailed his perspective on what the US had boasted as “America’s Global War on Terror”.

Another former US Marine scout sniper, Jordan Laird, recounted his combat tours in both Iraq and Afghanistan, which he and others referred to as “Vietstan”.

“You have a deeper understanding of the plight of the Vietnam vets who came home with lost limbs and being completely and utterly tossed to one side.”

The views were echoed by Marine scout sniper Tristan Wimmer, whose brother Kiernan, also a Marine veteran, died after suicide in 2015 after receiving a traumatic brain injury in Iraq before deploying to Afghanistan.

The 37-year-old Wimmer said of Afghanistan: “By any metric you choose to measure it, it was a fruitless effort. Getting rid of al-Qaeda or the Taliban – we didn’t succeed. Increased peace and prosperity for the Afghan people? We didn’t succeed.”

US wars: ‘The machine of making money, contracts’

Also reflecting on his return home after his battlefield engagements, Lilley pointed out that he could not even look at the US flag for several years because he felt so angry that his country had sent him and his colleagues to an unwinnable war.

The veteran explained his disappointment that the United States does not seem to have learned lessons from Vietnam, where 58,000 American troops were killed.

“We should avoid war at all costs,” Lilley added. “Don’t rush into the racket of war, into the machine of making money, contracts. A lot of people made a lot of money off of this.”

He said it took him years to let go of his anger.

While in Afghanistan, Lilley said he grew to understand why historians have called it the “graveyard of empires.”

Britain invaded Afghanistan twice in the 19th century and suffered one of its worst military defeats there in 1842. The Soviet Union occupied Afghanistan from 1979 to 1989, leaving after 15,000 of its troops were killed and tens of thousands were wounded.

The nearly 20-year US-led military invasion of Afghanistan also led to more than 3,500 US and allied military deaths, the deaths of more than 47,000 Afghan civilians, the killing of at least 66,000 Afghan troops, and over 2.7 million Afghans fleeing the county, according to the nonpartisan Costs of War project at Brown University.