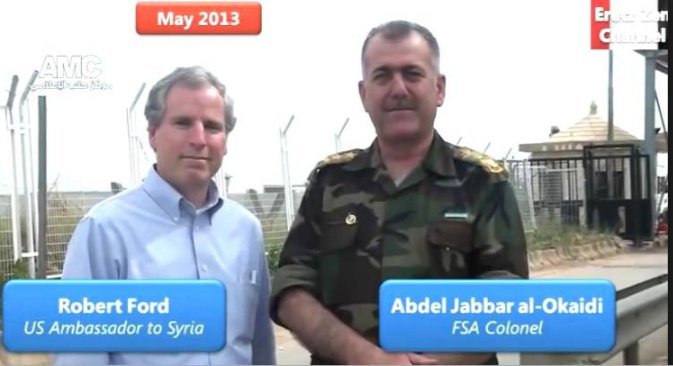 Palestine Catastrophe expands, displacement of Palestinians during the birth of the Israeli entity in 1948, Nakba Day.

Syria another scene of displacement, since 2011 the year of color revolution, engineered and designed by Western and Israeli figures.

Jisr al Shughur which is a town in Idlib province, around twelve miles from the Turkish border.  In 2011 this town witnessed a horrible massacre against Syrian security point, committed by the so-called peaceful protesters.  Soldiers were beheaded, some of them were struck on head by an ax. DNA tests were needed to recognize the soldiers’ bodies.

Our government organized a tour to a mass grave of Syrian soldiers committed by foreign-backed rebels, Uighur in Jisr al Shughur with other foreign diplomats.  Among those was the USA former ambassador in Syria, the head of the protesters’ movement at that time, Robert S. Ford.

Ishtebraq is a countryside in Idlib; this countryside witnessed two massacres against its residents.  The first one was in 2011, the second one was this year, 2015.

Some residents who survived this massacre linked it to Israel massacre in Palestine, the Deir Yassin massacre.  The key point is the next massacre was committed by terrorists, most of them from Chechnya.  Those terrorists were the reason behind the displacement of the original residents of Jisr al Shughor.

However, there are new residents, the right word is there are new settlers, Uighurs , the families of terrorists who are fighting in Syria as many other mercenaries under the name of moderate rebels in 2011, and the name of ISIS, later. They are Chechen, Uighur.  This movement of transfer of more than 3500 Uighur families to live in Idlib countryside after the displacement of its residents is sponsored by Turkish intelligence and al Nusra Front, ISIS — whichever the name of those terrorists.

Video of Uighur in Idlib countryside:

Since two  years ago, this dangerous movement to transfer terrorists from China, Uighurs,  from Turkey, Turkestan Party , to Syria:  Idlib, Raqqa, Deir Ezzor.

There are 20,000 terrorists from the Turkestan Party of Turkey; Turkey is training them and sending them to Syria. They had the ideology now that sites in Syria are their real homeland — not China or Turkey.  Such terrorists have been used in Afghanistan, before.

Meanwhile, the real residents have been murdered or displaced.

Syria to where?  This is a serious agenda to destabilize, balkanize, and change the demography and erase the real identity of this region.

Republished with the author’s permission.

The Guardian: Launching a ‘Save Idlib Terrorists’ Campaign?

How Israeli and NATO-Islamist crimes become the ‘Massacres of Assad’/ By Prof. Anderson

Liberation of Aleppo as Turning Point in War Against Western Terrorism/...

Killing innocent people is the language that west speaks. / By...