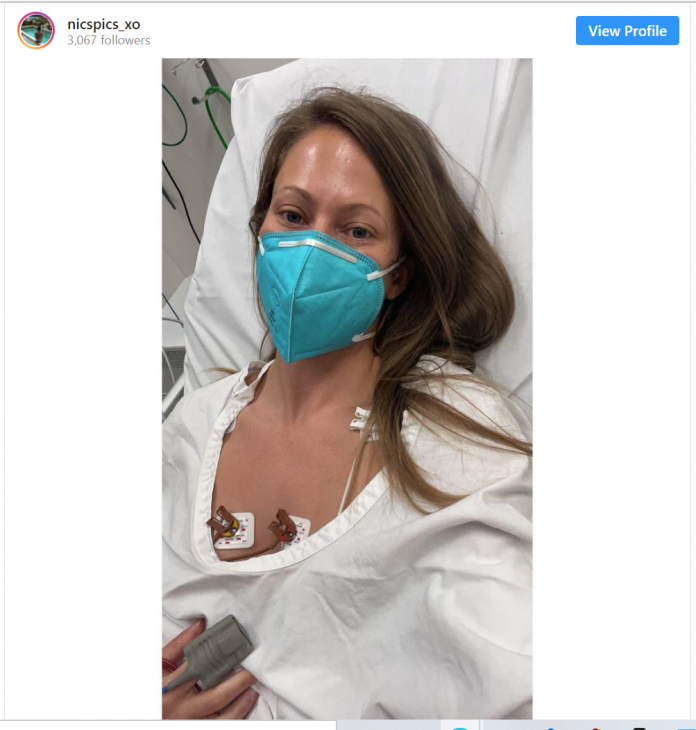 “So this is me yesterday at the Alfred hospital. After 8 days of feeling really crap having given into the pressure of getting vaccinated.

This is me having an ecg on my heart, and waiting for a chest X-ray and Bloods to be taken and possible further screening of my lungs incase of possible bloodclots.

I was vaccinated on a Monday and instantly felt awful. To say I felt drained is an understatement. By the Thursday and Friday my chest felt as though someone was sitting on it and I couldn’t even run in small stints with the dog, Friday night I had crushing pain in my chest and my left arm went numb. I decided to ride the pain out as I didn’t want to ‘burden the healthcare system’ but by Saturday and Sunday I was having stabbing pains in the centre of my chest every 2 minutes for hours. My back felt terrible too, right where my lungs sit and monday morning I woke up to stabbing, throbbing pains in my heart.

I finally decided to go to the hospital and whilst I sat there after I’d been triaged 10 people came in in the space of around 20 minutes and EVERY SINGLE ONE OF THEM had the exact same symptoms as me and all had had doses of Pfizer. I could hear each conversation crystal clear so I’m just relaying what I heard. One guy had been in two weeks ago after his first jab and had been referred to a cardiologist and was back again with the same pains in his chest he was 20!

Now let be clear, this is a vaccine I did not want. But having spent a massive chunk of my life savings just living during these 260 days of lockdown and being told I wouldn’t be able to work, be a part of society and just live without being bullied, segregated and discriminated against I caved. Now As I’m writing this I have stabbing pains in my heart and left side of my boob as well as the centre of my chest. I’m shaking with heart palpitations and feel exhausted. The doctor told me that I had had a reaction to the vaccine and many people have come in with the exact same symptoms as mine having had Pfizer but 98-99% were usually ok and that a lot of side effects are coming out as it is a ‘new vaccine in the very early stages’. I was sent home after extensive testing”

666 Cases of Heart Disease in 12 to 17-Year-Olds after COVID Shots – Less than 2 Cases Per Year Following All Vaccines for Past...

Video: Ready for Nuclear Holocaust with Russia Over Ukraine?/ By Rep...

“Nuremberg Principles”: Measure All Criminals by the Same Yardstick. When is...