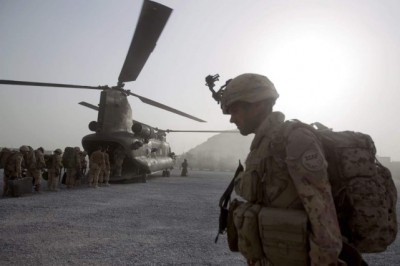 Bolivian actress and filmmaker Carla Ortiz’s recent interview with Dr. Bashar al-Jaafari, Syria’s permanent representative to the United Nations brings to the forefront several key issues regarding the dirty war on Syria and the West’s criminality.

Canada, for example, has always played a key role in the so-called Friends of Syria[1] group, which is composed of countries that support terrorism in Syria. Literally, the group consists of Friends of Terrorism. Jaafari points out that whereas there were 137 members in the group, now there are only 11.

This is a political victory for Syria. Whereas the original membership, including Canada, still supports terrorism in Syria, the declining membership is at least symbolic.

Jaafari explains that Syria refuses to be destroyed, as Iraq[2], and Libya[3] have been, and continue to be destroyed. Much to the chagrin of the West and its allies, Syria and its allies are defeating terrorism in Syria. Whereas (for the most part) terrorists are losing, Syrians are celebrating.

“Plan B” for the terrorist- supporting Western governments involves illegally supporting PKK/YPG/SDF terrorists who are trying to partition Syria[4] by carving out a “Kurdish” polity on stolen Syrian territory. Just as Canada is violating Iraq’s territorial integrity by supporting Kurdish warmongering ambitions there, so too is Canada supporting these divisive elements on Syria.

Jaafari also details difficulties in dealing with the increasingly corrupt United Nations. It is this institution, after all, which recently elected Saudi Arabia – which forbids women to drive motor vehicles — to its Human Rights Council. He outlines evidence-based instances where the U.N. failed to appropriately condemn the West’s use of false flag chemical weapons fabrications (i.e. Iraq’s non-existent WMD).Canada Supports Syria’s “Moderate” Terrorists, Endorses Saudi Arabia

The issue of chemical weapons, used extensively by the West and its terror proxies, is of particular importance now, since peace is on the verge of breaking out in Syria. The West and its allies have consistently demonstrated their preference for on-going, chaotic and destructive warfare, and they have consistently used false flag chemical weapons attacks[5] to further their genocidal goals.  Consequently, there are reasonable expectations that another such attack might take place as a pretext for escalated warfare.

In the interests of peace and humanity, we need to denounce these strategies of deception, and our (Western) governments’ support for terrorism.

We also need to spread the truth far and wide, to counter MSM lies about the dirty war on Syria.