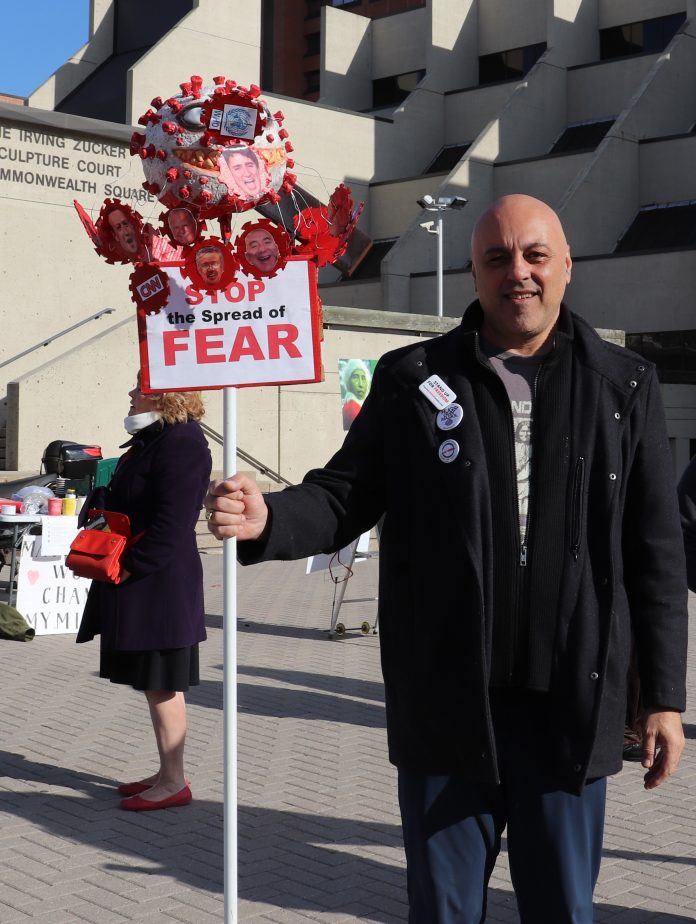 Mark OK, so Hamilton, Ontario, Canada, this is we are end of November 2020 and I came here to protest against the what I view is totalitarianism in Canada, the fascism. This is my opinion. And it’s they’re using this fake Covid scare to implement all sorts of draconian anti-human legislation and to usher in the Fourth Industrial Revolution. This is John, and he’s got about the best graphic here that I’ve seen yet. Could you tell us a little bit about your graphic, John?

Mark It’s not a graphic prop, I guess.

John Well, yeah, exactly. So it’s all in 3D. I built it earlier in the year, but it still holds true as to identify the villains of this event that’s going on right now. And, you know, when I say villains and what’s happening, I really think communism is the problem and they’re creeping in here. And if we don’t do anything about it, they’re going to just take our freedoms away.

Mark So tell us about who is this guy here?

John This guy over here is Mr. Mark Zuckerberg.

Mark OK, and tell us how he is impacting this.

John You know, it’s very easy to pick him because it’s like who’s benefiting, right? You know, and big tech, you know him, for certain, you know, he’s he’s benefiting by monopolizing information. But Mr. Bezos is benefiting in a very huge way.

Mark And how is he benefiting, how does Bezo fit into it? Who is he?

John He’s probably he’s Mr. Amazon and he’s taken probably all the small businesses that are closed. That’s where their business has gone to. I’m guilty. We’re all guilty. We’re only supporting the FedEx drivers in Hamilton. And that’s really how it happens

John You got Tedros.

Mark So so far, we got Bezos and Zuckerberg and they’re Big Tech. Is that more or less?

Mark These cartels have disproportionate impacts on all of us and they’re laying down this totalitarianism who else do we got there?

John We don’t need to mention who he is. He’s a big biggest one of the biggest villains. And if we want to pair him up with his partner, it’s right here.

John He always bragged about how it was so much fun to steal all the Jews money, being a Jew himself for 17 years old. You can check that on 60 Minutes if that he’s taken that money since   spread leftism around the world. The color

Mark Hold on a second, but isn’t he a billionaire?

John Yes, he is a billionaire.

Mark And so he’s all part of this scam, is he?

John He certainly, yes. Certainly, is.

Mark OK, hold on a sec now so he is engineering consent for the scam that that the billionaires will benefit from.

Mark Bingo. Next one.

Mark Oh hold on isn’t he a convicted felon, a financial felon? I think he is.

John He certainly is. He’s banned from many countries, including his home country of Hungary.

Mark Unbelievable. Who do we have next?

John This gentleman here just two days ago said we can’t shouldn’t be doing what we’re doing right now, which is protesting and protecting our freedoms. So we will just let him go away.

Mark Hold on a second, hold on a sec. So the Pope is on the same side as Big Pharma, Big Tech, Big, Big Data and and this Covid lockdown?

John Totally they are right there together. Yeah

Mark Bingo. Next who do we have?

John Well, now, when they say the virus can’t mutate, they’re wrong because here you go here. Here is a mutation of the virus the Bill Gates side is doing. I don’t know what. And his hermaphrodite wife there on the other side.

Mark OK, now hold on a second here. Let’s talk about this virus. My understanding is  based upon my research, based upon the World Health Organization, is it’s a low infection, fatality rate virus, maybe .14. So Rocco Galati constitutional lawyer says the harm due to the lockdown is disproportionate to the threat, the harm. And that’s 12 deaths for one for one supposedly Covid death, although they haven’t even isolated, purified, replicated Covid. so Yeah, I would agree the virus is not this virus that they haven’t, that they haven’t identified it. I would say, these players are the virus.

John That is correct.

Mark And who else do we have? Fauci how does he fit in there?

John Fauci, Fauci, I mean he’s probably benefited the most. He is the one that smeared Dr. Judy Mikovits and stole everything that she knew and became very famous.

Mark And she wrote a book about that. I read her book, next.

John She’s just a scammer. She just makes it in there because.

Mark Who else we got?

Mark Ok how does he fit into this?

John I mean, the virus is named after him in his country. After all, so they have to be there. And then the tyrant, John Tory who is power- tripping and trying to get Mr. Adam sorry, Scaley and his barbecue shop closed down and trying to just take it over because it’s of interest to him.

John The World Health Organization, though, heads it all, as you can see.

Mark Who’s the biggest donor to the World Health Organization?

Mark Bingo. There you go. Are we talking corruption here?

John Oh wrong side, then. All right.

Mark Are we talking corruption?

Mark Are we talking totalitarian control?

John And they’re all here.

Mark And how is this impacting you personally? Could you tell me about that?

John You know what? I just see what’s coming. Number one I have an autistic son that’s vaccine damaged. He’s not getting another one. And I’m certainly not. He’s twenty four years old. Nobody cares about him. Someone from his class talks at these events. My son, unfortunately, cannot talk.

Mark Stop one second. Thank you very much, sir. We’re going to do a part two with you, hopefully. Thank you, sir.

We are the many. They are the Few