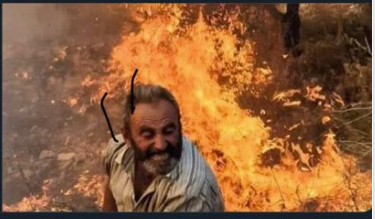 A Syrian researcher told RT Arabic on Saturday that the fires in Syria appear to be caused intentionally and not natural factors.

“In climatology, it is difficult for a fire to happen at night with a natural cause, and there must be an active hand,” Riad Qara Falah, professor of climate science in the geography department at Tishreen University told RT.

On what prompted him to come to this conclusion, Falah told RT that the fires occurred at night, and it is known that this is the coldest time of the day.

This means, according to Falah, that “the probability of fires during the day is much greater than the probability of fires at night. The other thing that Falah refers to, and which he also mentioned in his blog, is that the atmospheric pressure at night is high (in general and on clear days) and this leads to calm winds in general and the stability of the atmosphere, and when the sun rises, the air density decreases and the pressure begins to decrease and the wind strengthens.

Falah points out that it is scientifically known that out of every 100 fires, only four occur due to natural factors, which means that 96% of the fires are due to human causes, whether intentional or otherwise.

The researcher claims those who started the fire have committed “high treason” and should be punished, as these fires have caused an environmental catastrophe between Turkey, Syria and Lebanon.

Regarding the widespread maps of the fires that the region witnessed, which showed that the fires are not limited to Syria, Falah says that the fires witnessed by other countries were not of the same size and manner as the three Syrian governorates witnessed.
.
.
Falah reaffirms that “the fires in our country are intended and based on scientific analysis only,” adding that there are many questions to ask:
.
.
“Why did Syria not witness similar fires from 2015 to 2018, which were very, very hot years? And why did it happen at night and in separate areas, why is the timing close? All are important questions.”

Christmas in Syria, 2020/ Commentaries by Vanessa Beeley and Sarah Abdallah

Christmas in Syria, 2020/ Commentaries by Vanessa Beeley and Sarah Abdallah