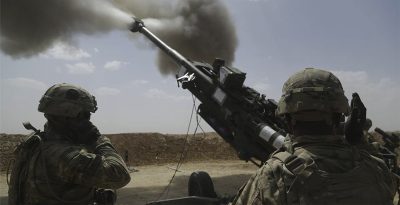 The U.S-led coalition has been funding and arming all of the terrorists in Syria, and they will continue to do so.

Arms will continue to be shipped covertly by the CIA via airways such as Silk Way airlines, and through U.S firms such as Chemring, Culmen International, Orbital ATK and Purple Shovel.[2]

But the stories, repeated incessantly, and sold to an ever gullible public, are shifting. The original story that there were “moderate” terrorists and that they were somehow “legitimate” is running into difficulties – despite the fact that it is patently absurd and the public usually swallows stories that are the polar opposite to the truth – so now a back-up story is being introduced to divert attention from the previous lies.

In an earlier article I explained this CIA strategy:

The strategy of “stories within stories”, and using competing narratives to confuse, to distract, and to lead the public down false paths (red herrings) is entirely consistent with the 9/11 crimes, the subsequent “War On Terror”, and the criminal invasion of Syria.[3]

Now the minority Kurds are being portrayed as the “good guys”, and so they will be deemed “legitimate” by the purveyors of “official narratives”.

The PKK terrorists from Turkey are now being re-packaged as YPG and SDF in Syria – an alphabet soup of confusion, and the perfect foundation for more stories within stories.

READ MORE: “Stories within Stories”: The CIA’s Strategies to Dupe the American Public

These terrorists are also proxies for the U.S in Syria, and, as with all of the terrorists, they are being used to destroy Syria’s sovereignty and its territorial integrity. Apart from their differing ideological outlooks, the Kurds and ISIS serve the same functions on behalf of their imperial masters.

Now that the U.S is setting up illegal military installations in Syria[4] with the apparent pretext of aiding their Kurdish allies, the Kurdish terrorists in Syria might be more useful than their ISIS, and al Qaeda et al. predecessors. All of which is a recipe for more conflict, death, and destruction – exactly what the imperialists want — so that they can better sell the familiar “It’s a (white man’s) burden, but we are here to help” story.