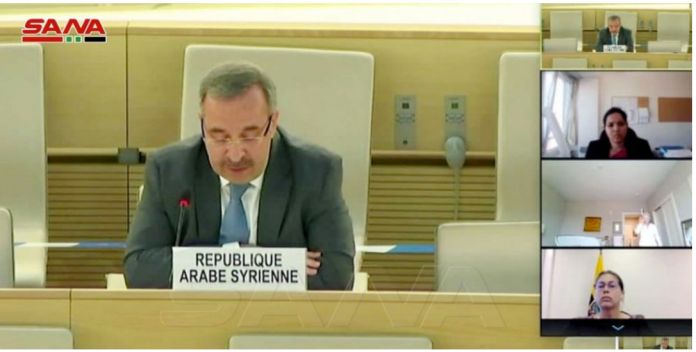 Syria’s permanent representative to the United Nations Office and International Organizations in Geneva, Ambassador Houssam Al-Din Ala has reiterated that the reports of the commission of inquiry on Syria lack objectivity since they abstain  from acknowledging  Syria’s right and duty of liberating its lands and protecting its people from the actions of the occupiers and crimes of  terrorist groups.

Ala expressed regret as the meetings and mechanisms of the Human Rights Council turned into a platform and a tool for defaming countries upon fabricated reports.

“The Council’s insistence on ignoring the US, Turkish and Israeli attacks on Syria, as well as their logistical and military support for terrorist groups that practice killing and terror acts against Syrians is a questionable matter,” Ala said in a statement about Item 4 of “the report of Commission of Inquiry on Syria” during the 48th session of the Human Rights Council (HRC).

He added that the continuous looting of Syria’s oil and wheat and smuggling them through borders is done in collusion with the US occupation which  deprives the  Syrians from their national resources and main rights including the right of development.

The ambassador went on to say : “ Describing  the places of  refining stolen oil and trading it with terrorist groups in Turkish-occupied areas as economic and human centers lacks professionalism and moral values.”

He clarified that the use of  water as a weapon by the Turkish regime against civilians through decreasing  the level of water that flows from the Euphrates river to Syria and repeatedly stopping the pump of drinking water from Alouk station to Hasakah city for long time is a collective punishment that amounts to a crime against humanity.

“The Turkish regime goes ahead with  hindering the delivery of humanitarian aid from Syria to northern areas with the aim of consolidating its destructive role in Idlib,” Ambassador Ala added, wondering why the commission’s reports say nothing about these Turkish practices that violate international law.

Moreover, the ambassador pointed out that the US occupation killed more than 50 civilians in an airstrike in 2017 on a school that was turned into a shelter for displaced people in Al-Mansoura town in Raqqa province.

“The Turkish invasion of Afrin area and other areas in Syria caused the killing of scores of residents in these areas and destroyed schools and displaced tens of thousands of people with  the aim of creating demographic change,” he added.

As for the situation in Daraa, Ambassador Ala that the deliberate distortion of fact aims to encourage terrorist groups, who killed 18 mayors plus scores of civilians and military personnel.

“The return of people to their houses in Daraa areas after ending the presence of armed groups and recapturing these areas by the Syrian state prove the Syrian state’s policy is true,” he underscored.

Ambassador Ala affirmed that the unilateral coercive economic measures being  imposed on Syria  were the reason behind the suffering of the citizens, adding they negatively affect their livelihood and efforts exerted to recover from the crisis.

He, in addition, reaffirmed Syria’s rejection of allegations about the use of chemical weapons.

Austria: Clear Sight or at the Abyss of Chaotic Tyranny. “Parliaments only serve to Ratify what the Dictators Decide”/ By Peter Koenig