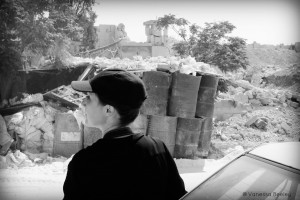 A true humanitarian crisis of malnutrition, starvation, and untreated diseases has been occurring for over a year in Syria far from cameras and headlines, and has been steadily worsening under the total siege, imposed since March 2015 by terrorists of the Jaysh al-Fateh (Army of Conquest) coalition on the two northern Syrian villages of Foua and Kafarya, completely isolated and surrounded by Western-backed terrorists.

The Syrian poster child of suffering is not the ‘Aleppo boy‘ whose image was recently splashed on front pages and social media in a coordinated act of propaganda. The Syrian poster children of suffering—starvation, murder, maiming, and denial of medical care, thanks to Western-backed terrorists—are many, but perhaps the most severe and continued examples these days come from Foua and Kafarya.

Photo from inside Kafarya & Foua. The true face of starvation.

Under siege, the diseases and illnesses of children (and adults) go untreated due to a lack of medicines and for want of a properly-equipped and functioning hospital.

Under siege, the critical injuries of children (and adults) in many instances result in death, otherwise in prolonged suffering due to the same, preventable, denial of medical care.

Ali Wael Karabash, 5, is believed to have skin cancer and must avoid bright lights and sunlight. Photos of the boy from several months ago to the most current images being shared on social media by Foua residents show a drastic worsening of his skin cancer. Until now, there have been no campaigns by human rights groups, the UN, or media to inform people of his treatable disease, nor to advocate for that treatment. Instead, the boy suffers the physical pain of the festering lesions on his face and the psychological pain of knowing he could have treatement, and of a childhood robbed of peace and even sunlight.

On August 27, Laith al-Haj, 6, was shot in the head by a terrorist of Jaysh al-Fateh in neighbouring Binnish village. Until recently, Laith was in critical condition, only some day agos showing signs of mild improvement. Laith’s 4 year old brother Mohammed was likewise sniped that day, shot in his neck.Video Player00:0002:36

Whereas the Aleppo boy had front page coverage and world-wide sympathy, these two boys, among a tremendous many more, who continue to need urgent medical care, are pointedly ignored by the media, as are the documented maimings and killings over the years of children and other civilians in the villages.

The following day, the terrorists, which include al-Qaeda-affiliated Jabhat al-Nusra and Turkish-backed Ahrar al-Sham, fired another over 60 of these bombs at estimated 23,000 residents. The mercenary coalition surround Foua and Kafarya from all directions, making it impossible for residents to flee the bombings, let alone escape the siege.

Kafarya and Foua residents defend their villages, but with no where near the arsenal with which Western, Turkish, and Gulf-backed mercenaries routinetly attack. In addition to the array of bombs these terrorists possess, they also use tanks to fire upon the village residents.

According to local journalist, Jameel al-Sheikh, the August 30 bombardment injured at least nine people and killed an eleven year old girl, Aya Steeh, who died of her wounds during surgery.

As of September 6, no major English-language media have reported on these attacks, athough on social media, supporters of the besieged villages continue to actively share photos, videos and tweets of the carnage.

Infant Rimas Al-Nayef was one of at least 5 children killed by NATO-backed terrorists’ shelling on August 10, 2015 in the northwestern Syrian village of Foua.

One year ago, I wrote of the murder of infant Rimas al-Nayef, whose August 10, 2015 killing was not reported by corporate media. Nor were those of four other children, and 25 other residents, killed the same day in a bombardment of up to 1,500 terrorist rockets, missiles, mortars and other bombs on the villages.

At that time, I also quoted Syrian journalist Saer Asleam who reported:

“There are more than 60 critically ill people, and others who have been seriously injured by the shelling. Heart and kidney patients, and those with cancer and other severe diseases, are at risk of dying due to the lack of the necessary medicines and drugs for treatments.”

This was one year ago. By now, the number of critically-ill and seriously-injured is exponentially higher. And still, silence in the United Nations and corporate media.

Nuermous other children in the villages have since been killed by terrorist bombings and snipings, or by the siege. Some of these deaths include:

–Najeb Ahmad Hallak, 10, shot in the heart by a sniper while returning from school in February, 2016.

–Zahra Mohammad Haj Saleh, an infant, died of malnourishment and cold in February 2016.

–Fatma Nour al-Deen, just under a year and a half old, died in January 2016 from a lack of medical care.

“People Are On The Edge of Death”: Siege Testimonies

In Damascus this August, I met with a number of Foua residents who had been evacuated in late December 2015, a rare evacuation which saved a proportionately small number of injured or ill residents.

The exchange allowed 336 severely-injured or ill from the villages, including some defenders of the village, to be transported out for needed medical care, in exchange for the transfer from Zabadani and Madaya districts of 126 people, including an unknown number of terrorists.

The evacuees spoke of the hellish conditions the had endured until December, stressing that eight months later, life is unbearable, “people are on the edge of death.”

They also spoke of an increase of water-borne diseases—particularly among children—with the population drinking whatever water they could find, often contaminated.

Although there are wells and water pumps, the people lack the electricity or fuel to operate the pumps. Some people have gone so far as to press olive oil to run the pumps, but even that only lasted so long and depleted a vital food source.

In the August 30 bombings of Foua and Kafarya, Jaysh al-Fateh mercenaries destroyed the towns’ water tanker which had been used to distribute what water could be pumped to residents.

Due to sniping and shelling attacks of the mercenaries besieging them, the residents have lost access to farmland, thus a food source, and to trees for winter heating and cooking.

One of the residents, Maher, said that he had lost 20 kg from the March 2015 siege until his departure in December. “Imagine how people are now.”

According to Foua residents in the village, Zainab Waheed Muhsen, 65, needs unavailable oxygen therapy once every three days for her Pulmonary fibrosis. She is reported to also have Parkinson’s, the medications for which she cannot receive, and suffers from liver and heart problems.

Patients with heart, liver, kidney and other common diseases remain without adequate treatment.

In February 2016, Foua residents and the few doctors there issued a statement regarding a desperately-awaited shipment of aid finally received. They noted that it was inadequate, with perished food items, and no meat or produce included. Regarding needed medical aid, the statement read in part:

“International Organizations consistently ignore very specific and clear needs and are assiduously failing to meet those needs time after time. Especially for some medical supplies and essential medicines, like the anaesthesia drugs, sterilization and hygiene products.

The hospital is also surprised by the lack of supplies of diabetes medications in particular, especially insulin, as well as anti-hypertensive drugs, diuretics and many other chronic disease medications.

As for our suffering children, our medical staff here are demanding to know why, for 10 months, you have not supplied any vaccines. …thousands of children trapped in our towns are at risk of getting sick from diseases that could be prevented by these vaccines…”

Iman Rehal, 39, one of the evacuated residents, was shot in her head on August 15, 2013, while in her home, by one of the snipers besieging Foua. She stayed in a coma for six months, and has since endured fits of shorter comas.

In the first two months of her coma, Rehal was stuck in Foua because the roads out were not safe. After two months, she was transferred and treated in a Latakia hospital. When months later she was to go back for further medical care, a terrorist missile hit near her house, preventing her from leaving that day.

Months later, the siege on Kafarya and Foua began, eleminating any possibility for further medical treatment. She was included in the December 2015 evacuation, along with her two young children, due to the shrapnel that remains in her head and the paralysis affecting the left side of her body.

“We want this suffering to be conveyed to the UN.”

An August 2, 2016, United Nations Security Council session revisited a 1996 report on violations against children during armed conflict. The UN’s press release noted that Special Representative of the Secretary-General for Children and Armed Conflict, Leila Zerrougui, “said many of the impacts of conflicts on young people could not captured by statistics. Children lost parents, were disabled due to curable illnesses and suffered long-term psychological trauma.”

But the children of Foua and Kafarya’s curable illnesses and long-term psychological traumas go unaddressed by Zerrougui or the United Nations.

Syria’s Ambassador to the UN, Dr. Bashar al-Ja’afari, addressed the session. Speaking at length on the real causes of the suffering of children in Syria and in refugee camps, Ambassador al-Ja’afari highlighted that Saudi Arabia’s perverted Wahhabi ideology has been actively enacted against Syrian children by Saudi-backed terrorists in Syria.  Translated from his speech in Arabic, excerpts of his address include:

“The whole world has been shocked by the horrendous crime of the slaughter of the Palestinian child, Abdullah Issa, who sat wounded, stunned, surrounded by human beasts…Such a group which has been considered by some as ‘moderates’.

Thus, that child was slaughtered according to the Wahhabi ISIL legitimacy, in order to commit this disgusting crime.

But it is a genetically-modified crime.  A group of ‘moderate’ thieves, called Nour al-Din al-Zenki, a group manufactured in Turkey, which was described by the United States ambassador in a previous session as ‘rebel fighters’, as you might recall; which is a terrorist group which practises the Wahhabi perverted thinking, and receives financial and arms support from Saudi Arabia, Qatar, Western powers and the Erdogan regime, this group has committed this ‘moderate’ criminal act.”

The images and stories coming out of Foua and Kafarya are so appalling that they should be highlighted in the United Nations and in Western media, both of which purport to care about Syrian civilians.

But because these realities do not fit the warped and untruthful narratives of “moderate rebels” and a “dictator” killing his people, the suffering of Foua and Kafarya residents goes unmentioned in the media which hypocritically and immorally champions terrorists in Syria as “rebels”, and unmentioned in the United Nations, which systematically works to silence the Syrian voice.Video Player00:0000:40

The people of Kafarya and Foua, and of everywhere ravaged by death squads deemed “moderates” in Syria, must not only to be heard, but their siege and terrorism-imposed suffering must cease. These children, adults, and elderly are the faces which people who cry for the Aleppo boy- and every propaganda campaign before him- need to know of and need to advocate for.

SUPPORT 21WIRE and its work by Subscribing and becoming a Member @ 21WIRE.TV

Scoundrels and gangsters at UN: Silencing the Syrian narrative/ By Eva...