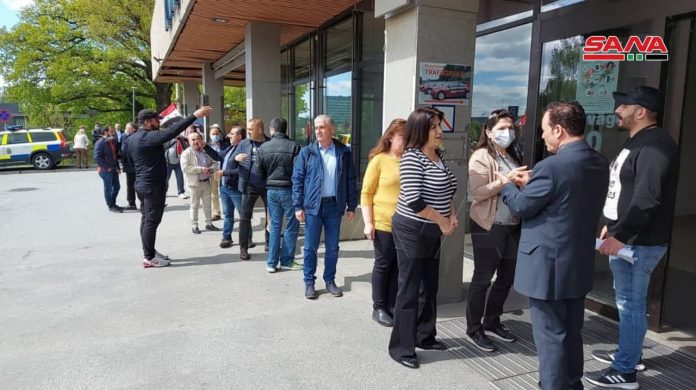 In the Syrian diplomatic missions abroad, the Syrian presidential election was conducted today from Australia to Argentina, a beautiful process marred only by a terrorist attack on Syrian refugees in Lebanon killing one of them while heading to the embassy to cast his vote.

The first Syrian mission to run the voting process was in Sydney, Australia, the Syrian consulate there carried out a peaceful, organized, transparent, and civilized democratic process to be followed by other Syrian missions around the globe as the sun moved through the time zones.

The Syrian Presidential Election abroad today is a milestone in Syria’s modern history, this is the first of two steps in this process, the Syrians inside Syria will be voting in less than a week from now on the 26th of this month.

NATO member state Germany decided to go opposite the stream and failed its consulate agreement duties by banning the Syrians in Germany from casting their votes, it’s the same Germany that is leading in many times the NATO klan at the United Nations Security Council against Syria to defend the rights of the Syrian people and its representatives flooding the United Nations building crying for the Syrians suffering without a ‘democratic’ process in Syria. It turns out, Germany wants a Syrian ‘democratic’ process that suits its agenda in the evil NATO alliance it’s a member of.

We didn’t expect Turkey to respect its obligations as per the Geneva Convention regulating the work of consular missions in it, Turkey under Erdogan is oppressing its own people, its dictator madman Erdogan turned his country into a massive prison for journalists, activists, and even members of the parliament, not to mention the hundreds of army and police officers he jailed and the tens of thousands of Turks who lost their jobs because they don’t support the madman’s dreams of becoming a caliph.

Turkey, which failed many international and bilateral treaties, which illegally occupies parts of Syria, which blocks the flowing of the Euphrates River waters into Syria depriving up to 6 million Syrians and Iraqis of the water they need to drink and irrigate continued in its neo-Ottoman policies and didn’t allow the Syrian consulate to conduct the elections.

Both these countries, Germany and Turkey, have shown the world the hypocrisy of their calls for peaceful change in Syria, they oppose any process that does not suit their anti-Syrian agenda.

Syrians flocked to the Syrian embassies and consulates around the world, the largest turnout was in neighboring Lebanon, just like in the year 2014, thousands marched toward the Syrian embassy in Beirut to cast their votes. Those unlucky ones who had to go through neighborhoods run by uncivilized primitive radical Christians in Beirut and radical Muslims in Tripoli in the north were met with terrorist attacks. Primitive uncivilized mobs attacked Syrians, most of the victims are Syrian refugees, heading to cast their votes in their country’s presidential election.

https://videopress.com/embed/rK1W3Dx1?preloadContent=metadata&hd=1The video is available on BitChute.

One young man was killed with stones by a Lebanese Christian mob in Saadnail neighborhood, East Beirut, the man was with his family and was killed in front of his young child.

The pictures and footage of the assaults are all recorded and shared on social media, the Syrian Ambassador to Lebanon called on the Lebanese government to protect the Syrian citizens in Lebanon from Lebanese terrorists and gave instructions to a lawyer to file legal cases against those involved in the killing and the attacks.

Members of Geagea’s so-called political party have vowed never to allow the Syrian refugees to return to their country in an attempt to use them in political bargaining against the Syrian state and to steal parts of the aid sent to Syrian refugees from the international donors.

In Tripoli in north Lebanon, mobs of Lebanese terrorists of the ‘Future Party’, a party run by the family of Saad Hariri who is also loyal to the Al Saud family blocked the roads and attacked the Syrians heading to Beirut for the voting.

Christian terrorist mobs blocked the roads for the Syrians returning through their areas calling on them to go back to Syria; these mobs belong to a radical Christian party called the Lebanese Forces, its head for the past 30 years or more is Sameer Geagea, he was sentenced for life for his role in multiple high-level murders including killing Rachid Karami, the sitting prime minister of Lebanon at the time and a whole family of one of his political opponents, his role in the Sabra and Shatila massacres against the Palestinian refugees, and attacking a church with explosives among other heinous crimes, he’s on the Saudi payroll.

The Syrian refugees abroad, especially in Lebanon, prove for the second time after the 2014 presidential election that they fled the country from the NATO-sponsored terrorism carried out by groups the likes of Al Qaeda FSA, Nusra Front, ISIS, Turkestan Islamist Party (mainly of Chinese Uighur), and others, not from the Syrian state as the western officials and their mainstream media propagandists falsely claim.

To help us continue please visit the Donate page to donate or learn how you can help us with no cost on you.
Follow us on Telegram: http://t.me/syupdates link will open the Telegram app.