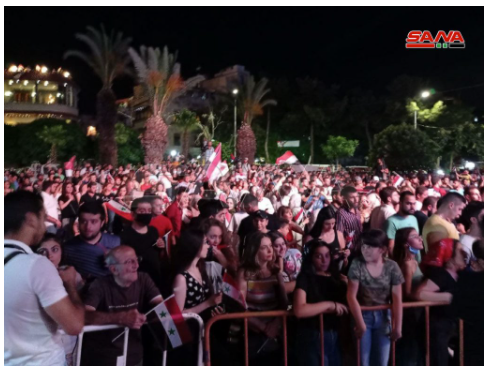 Hello. I’m a Syrian journalist from Syria And I want to convey a message to your audiences. I want to tell them that we were living in peace before the start of the war in my country in 2011. We were living in peace under the leadership of President Bashar Al Assad the same president who the West wants to change in order to create chaos in my country just like they did in Iraq and Libya.

I wonder why the US administration and its allies want to bring their false democracy to my country? They have no right to prevent us as Syrians from voting in presidential elections or selecting our president.

The Syrian president leads Syria and not the US or the Western countries.

The US forces are occupying part of our territories and stealing our oil and wheat. And at the same time the US administration is imposing sanctions on the ordinary Syrian people.

I want to know why the US and its allies want free and fair elections in my country! Do they care about us? If yes, let them lift the sanctions they are imposing on us. Let them return our stolen oil and wheat.

They provide the Kurdish Democratic forces and its militia with all forms of support to prevent the Syrian people from getting oil.

I’d like to tell you audiences to listen to voices from Syria. Actually the book entitled “Voices from Syria” shows the reality of events in my country and explains the goals of the war on it and how it was planned.

Please try to have time to read the book and let me know your opinion about it.