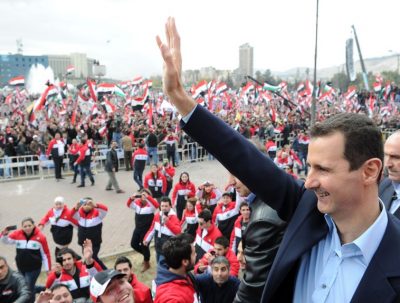 President Assad is not a “brutal dictator”.[1]  He never was. In fact Syrians have dubbed him “Mr. Soft Heart.”[2]

Western demonization campaigns against him are not and never were evidence-based.

Syrians themselves are not “stock” characters either.  Certainly, they can not accurately be defined according to religious or any other labels. Such “orientalist” projections serve imperial, “supremacist” agendas, but again, they are not reality-based.

Syrian voices are conspicuously absent from colonial media, since a realistic depiction of who they are and are not would necessarily frustrate the media’s criminal, warmongering agenda.

Syrian voices are important for Truth and Peace.

Camelia Dona has lived in Latakia, Syria, since 1989, where she worked as a pharmacist. Her story is particularly poignant since the pharmaceutical industry — like so many other industries in Syria — has resisted the invasive tentacles of Transnational Monopolies[3], and their pursuit of profits to the detriment of humanity.

Dona’s explanation is an indictment of Western imperialism in Syria:

“Many Syrians can tell you stories about the life before the war…before and after 2011… I’ll choose to speak about my profession, how good it was and how clever was the strategy in drug production and administration.

I m a pharmacist and I came to Syria in 1989.There were only a few Syrian drugs, most of them were imported from other countries. Gradually things changed. Many drug factories were built and before 2011, Syria was almost independent in the production of the drugs … 95% or more of the drugs were made in Syria, meaning 1. jobs for Syrians 2. low prices for the drugs. Even insulin was produced in Aleppo (I visited that factory 10 years ago … destroyed by ISIS). In general, only infant formula milk and some hormones products were imported.

Many factories bought the license from international brands like Novartis, Pfizer… etc.

Many of these factories were destroyed…people who worked there were killed or kidnapped or jobless….and many of the drugs disappeared from the market…

Now, because it is much better in Aleppo and Damascus, many drug factories have been rebuilt. You know, between 1989 when I came to Syria and 2011 1$=5o Syrian pounds ( 48-51)…. Such stability was not pleasing to Syria’s enemies.”

Meanwhile, the testimony from the two Syrian ladies below explodes the “humanitarian” myth about Canada’s criminal foreign policies.

All Canadians should be asking the same questions of their elected “representatives”. Evidence-based information, rather than war propaganda, should be informing Canada’s foreign policy.