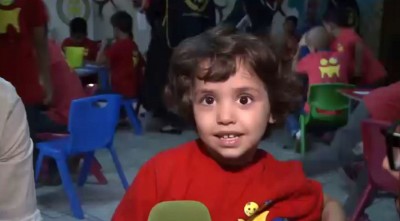 Syrians are, first and foremost, human beings. The notion that they can be accurately described as Sunnis, or Shias, or Muslims or Christians is misleading. It is a form of xenophobic “Orientalism” that obliterates their humanity. Labelling people according their religious affiliations is an imperial weapon used to create sectarianism. And the West seeks to fabricate sectarianism in Syria.

Syrians in liberated areas of Syria celebrate Christmas, just like we do, but in terrorist-occupied areas Christmas celebrations are forbidden. Such is the success of Canada’s foreign policy. If the Western-supported terrorists were to win, Christmas would not be celebrated in Syria at all. In word and deed, we support anti-Christmas, anti-Everything terrorist proxies in Syria.

When the government and media messaging dehumanizes Syria and Syrians, and the public accepts it, the stage is set for more “regime change” war which has inflicted terrorism on Syria and all Syrians for seven years.

We should follow Syria’s example and consider Syrians first and foremost as human beings. Once they are humanized, it is easier to understand their resistance to the West’s terrorist proxies. When we see Syrians (and those who live in other imperial “prey” nations) for who they really are – rather than as  fictitious depictions of them — we will be better equipped to see that imperialists dehumanize all the peoples and all the leaders of countries that they seek to destroy. Furthermore, we’ll see that they seek to transform their fictitious narratives into self-fulfilling prophecies.  Imperialists create sectarian conflicts. Divide and conquer is a colonial staple. Hate is a weapon of war.

READ MORE: Drivers Behind the War on Syria and the Impoverishment of Us All