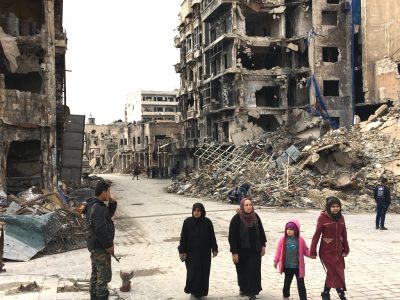 During the Western-supported terrorists’ reign of Death and Terror over Aleppo, children felt “condemned to die”. They had no possibility of escape. They were ready to die. For years, terrorists were killing and crippling their friends and loved ones — a sentence of death or dismemberment for which no crime had been committed.

Now that Syria and its allies have all but defeated NATO’s terrorists, these same children feel “condemned to live”. Invisible scars haunt them still. Their future is colored by their past, and they feel shackled.

We in the West inflicted these scars, and we continue to do so.

Pierre: hey, stranger with the video….

Reporter: well, let’s speak, rather than English, Would you like to speak in ..

Pierre: I can speak in English, it’s OK.

Reporter: OK, this is someone whom I think of as a hero. One of my heroes. Definitely a hero of mine. I’m pleased to be, honored to be with him today. We met him by chance in Aleppo. Thank you very much for speaking with us. Yeah. And I appreciate your work so much this year. You’re a saint in many ways.

Reporter: Could you tell us what how life has changed in Aleppo since the liberation?

Pierre: It has been the very different steps because during the war we were besieged by the terrorists. The media used to talk about the army besieging the terrorists, but actually we were besieged first. The army moved around the terrorists and besieged the terrorists back. So for like a brief period of time, really, we thought that Aleppo will never be liberated and we really thought that Aleppo will fall because they were attacking by thousands and thousands and it was really, really hard because the neighborhood I was living was like really front line. And we can hear the terrorists screaming “ALLAHU AKBAR” and we can hear them singing. So for like a few months, we spent time like with our clothes, the nights, the bags to keep us really warm because we’re rethinking that we have to run overnight. So step by step, the only version that’s normally fallen. So they’d be really in a safety situation because they were attacking by thousands sometimes and they don’t want to wait and they didn’t get in is that the planes were taking care of them, the second and the third wave of the terrorists coming.

And but were there shells so much more and more and the time was passing over 17 shells were out in the the street that was bombed not like every day, but nearly ..everything after in my neighborhood was like twenty five martyrs a day rockets just my neighborhood, which is like..

Pierre: Anybody who didn’t target anything specifically because they use mortars and use carters. But there’s no way to target any specific target, they just choose the degree of launching and it goes and the function of like daily precautions in the media here and everything, they target over places on the same….

The purpose is to kill people.

And I heard I heard they killed maybe 11000 civilians, around 12 to 13000 civilians, and they crippled and wounded another. A large number as well, 40000. Yeah, it has been very, very tough because I can tell you would just come back from the school and we’re talking with the children. We were trying to make the difference between now and before and still today. The big problem here is that most of them, they were ready to die the most of my children.

Reporter: Really? How old are they?

Pierre: I had them between 12 to 17 years old. So I have like the seventh grade to the 11th grade. And most of them, they were ready to die. And actually the situation now is getting much better. Everything is really good because we are not bombed anymore here a little bit, some time. But most of the neighborhoods are still going around the city. But here, it’s like it’s even worse for the youth because before they were ready to die, yes, they were condemned to die.

Reporter: So why tell me why is living harder now?

Because before they could just go, can they live being under the circumstance of war and everything? But how can I say, they have the same situation as before, but we’ve had the possibility to escape through death to death. It was really fine! The only one thing was which was really scaring the youth here was to be crippled. Yes. This was like the fear of everybody or to lose somebody you love. But now I can see the situation is much better. The families, coming a little bit like, the sanctions, and everything else holding the country down…

Reporter: OK, so their kids are afraid to live, is that what you’re saying?

Because now they’re, they have to be here with a job with that in the future, no job, no opportunity. They don’t, they don’t see this. They don’t in their mind, with the vision they have the war with, they’re going to find the fathers, the brothers, whatever. They don’t expect anything from the future. It’s really, the only one way you see, that they can have something in city will be to travel somewhere else outside the country… Here in Syria, they don’t see it, because they just see that they are two kilometres from here..we’re still besieged by terrorists in the path to see. So they don’t see a future struggle. They have dreams, all of them have dreams, bad dreams! Trauma!. They have. No, no, no. Yeah, but they have, how can i say, they have ambitions. They really see themselves. At the same time, they started to imagine that this is possible. OK, self confidence is down. Yes. A lot of psychological, spiritual trauma. And the work we do with that, the work you’re doing, you’re trying to help them with everything you’ve worked for, the work with the children.

Yes. It’s about the emotional guidance to them to keep the things important to erase which is useless and to put the finger right there to deal with the things. Yeah, that’s right, erasing what is deeply rotting inside. Yes. Now, is it correct that in terrorist occupied areas the kids do not go to school? Of course they don’t. They don’t go to school. They actually must have the school used by the military because you need the management of the school that is perfect under ground.

Oh you mean a terrorist. They take over the school. Yeah.

And the schools are saved some time by some association or whatever. It’s like a school mostly based on the religion. On the ” Al Quran” ,Yeah, we were talking about that the other day, that one of the first things they attacked was education because the the terrorists, because they don’t want an educated population, they just they stole everything from the people more than their own, more than they stole their hope.

They stole their lives, they stole everything they can, eventually anybody can imagine to have one day! So the thing is that today you can see the east has reached the people, they’re coming back! All the children are just so happy to be in the schools and have the chance to be with other youth. Yeah, eccept the streets like. But they have almost nothing to stay inside

because, of course, where the plane’s right where the terrorist. So it was really dangerous and the situation was worse because they couldn’t have any way to escape.

Yeah, they were stuck there because the terrorists kept them there. They were really used as human shield and most of the people are saying that human shield is like, how can say, it is a term which is used by the Syrian government, which is not! They were used by human shields as they were using Duma. They were using Gouta. They’re still using lots of places. Yeah. And the fact is that now is going with Idlib, and it will happen the same at Idlib will be the next step for the Army and the next step for the terrorists, maybe even will have a new chemical attack in Idlib…

Yeah, I hope not, because it will be so big on. I don’t understand how people can still believe it. Yeah, what do you think about that chemical attack? Pierson Sharp was there. He saw nothing. I wrote an article about I don’t think anything happened. I think it was strictly false flag.

What do you think? It’s like the bodies where, staged, and there were bodies before they were killed, by any way or if it was real and that these people died from chlorine and certainly not is not the government of Syria. They have no purpose. I’ll tell you one thing and give you something like very, very logical for us here on the unions of the war. And when we see the planes and bombings from inside out on us, you need the army of ways to kill a hundred times much more people than using any barrel of chlorine, and the cluster bombs, have dropped two cluster bombs that can kill if they want like 500 people.

It’s easy and it’s pretty obvious it is for people living here. It must be pretty obvious. And the people you need the purpose of the city and the government and the Russians not to kill the people, but the people who are stuck in military places. And the problem is, it’s really hard for a lot of people today to imagine that. Yes, about after everything we heard on television, after everything we heard on the radio, it’s pretty hard to imagine that what can be the same today can be real!

And I’m saying that for sure. The terrorists have used the stoy, about the whole liberation. Yeah. My government I read the intelligence report of my government and they’re saying we have no proof that the terrorists haven’t used all but once had 100 of kilo of chlorine. Right. Used by Saudi Arabia. Yeah, right. And this is the truth. Doesn’t matter anymore. This is really on purpose to build a pretext. Yes. Or eventually to show that the international community doesn’t stay apart from the conflict or eventually to make a new stage on the war.

The White Helmets are “Black Helmets”, They are Al Qaeda And...