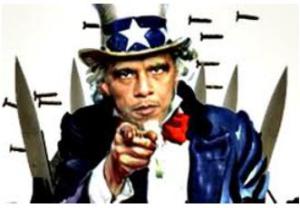 Prominent academic and author Dr Michel Chossudovsky warned that the so-called war on terrorism is a front to propagate America’s global hegemony and create a New World Order.

Dr Chossudovsky said terrorism is made in the US and that terrorists are not the product of the Muslim world.

According to him, the US global war on terrorism was used to enact anti-terrorism laws that demonised Muslims in the Western world and created Islamophobia.

Elaborating on his argument, Dr Chossudovsky said that NATO was responsible for recruiting members of the Islamic state while Israel is funding “global jihad elements inside Syria”.

Dr Chossudovsky, who is also the founder of the Centre for Research and Globalisation, further emphasised that the global war on terrorism is a fabrication, a big lie and a crime against humanity.

“The Globalization of War is undoubtedly one of the most important books on the contemporary global situation produced in recent years.

In his latest masterpiece, Professor Michel Chossudovsky shows how the various conflicts we are witnessing today in Ukraine, Syria, Iraq and Palestine are in fact inter-linked and inter-locked through a single-minded agenda in pursuit of global hegemony helmed by the United States and buttressed by its allies in the West and in other regions of the world.”   Dr Chandra Muzaffar, President of the International Movement for a Just World (JUST)

The Globalization of War: America’s “Long War” against Humanity

The Globalization of War, America’s Long War against Humanity  can be ordered directly from Global Research Publishers.

Tun Dr. Mahathir Mohamad has been elected Prime Minister of Malaysia. This article and video was first published  in May 2015 The New World Order is a big threat to sovereign states, speakers at an international conference say. The anti-war initiative, Perdana Global Peace Foundation, has a single goal of…

A New World Order: A Threat to Sovereign States