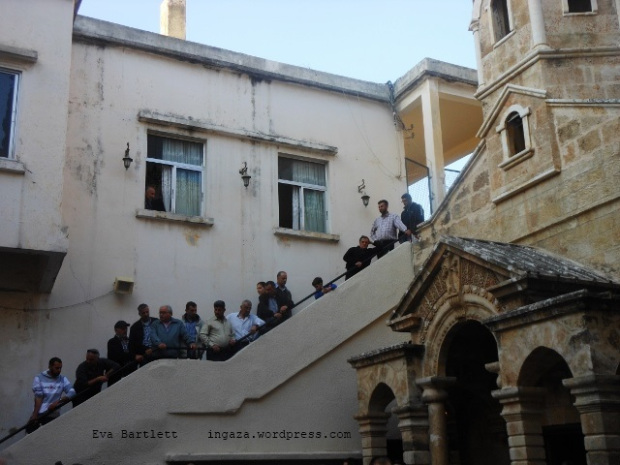 Kasab residents take shelter in an Armenian church in Latakia, after fleeing the attacks of foreign terrorists on the village near the Turkish border.

In the city of Latakia, nearly 2000 Kasab residents shelter at the Armenian Orthodox Church of the Virgin Lady, after having fled the assault from Turkey which began Mar 21, 2014. At least 80 people massacred by the foreign insurgents, who from the beginning were sniping at and shelling mortars at the civilians of Kasab, Asbarez reports.

“On March 21, NATO-backed mercenary forces and Turkish Armed Forces launched a massive offensive on the Syrian border town of Kasab in the Latakia province. The unprecedented overt military aggression by Turkey and its NATO allies is the clearest indication of their desperation in the face of Syria’s steady progress towards a decisive victory on all fronts.

…on March 21, backed up by the heavy artillery fire of the Turkish Armed Forces, over 1500 mercenaries launched a coordinated assault from at least five separate points across Turkey’s border with Syria. They were directly commanded by NATO’s radar base on Keldagi (Mount Aqraa) on the border and supported by the Turkish Armed Forces.  The mercenaries used pick-up trucks fitted with anti-aircraft weapons, tanks belonging to the Turkish Armed Forces, vehicles loaded with heavy weaponry and lorries. The primary and initial assault was the one launched from the Yayladagi border gate to the opposite Kasab border gate, during which masked Turkish special forces troops killed 15 Syrian border guards.

The majority of the mercenaries fighting in Kasab are of Chetchen, Albanian, Saudi and Turkish origin.18 Ambulances are regularly crossing Turkey’s border with Syria to collect the wounded mercenaries and transport them to hospitals across Turkey’s Hatay province. In fact, local protestors in Hatay’s Harbiye district blocked the paths of those ambulances.

On the other hand, by refusing entry to the mercenaries fleeing the attacks of the Syrian army, Turkey’s border guards are forcing them to continue the fighting.

On the fifth day of the offensive on Kasab, mercenaries based in the towns of Yayladagi, Altinozu, Antakya, Reyhanli, Osmaniye and other areas were still being deployed to Turkey’s border with Syria.”

“Rebels” in Kasab, from http://asbarez.com/121007/reports-cite-80-dead-in-kessab-churches-desecrated/

Lilly Martin, an American living in Latakia, had this to say about the Kasab invasion:

“Initially, there was a massacre of un-armed Christian civilians there, by the Radical Islamic terrorists, coming across the border with aid by The Republic of Turkey. Note: Today’s Zaman is a Turkish newspaper in English language, one of 3 such. They wrote this article.  Since the invasion, destruction and occupation of Kassab, the Syrian Arab Army, aided by soldiers sent from the Republic of Armenia,  and some militia units of SSNP (Syrian Socialist Nationalist Party) and some local residents who took up arms to free their land, have  been battling the terrorists.  The terrorists at first made advances and took more territory, then the SAA and allies made advances and regained the Police station  at Samra (a tiny spot on the beach at the exact connection of Syria to Turkey). The terrorists had held this spot as a ‘landing’ area,  they had come in on boats from Turkey with men and supplies. That spot is now back in the hands of the Syrian gov’t, as Syrian Naval vessels had attached the position on the beach and reclaimed it.

But, Kassab, the village, is still firmly occupied by the terrorists, who have been identified as Al Qaeda and linked groups. They are all  foreign armed men, none are Syrian. The Free Syrian Army is not involved.  We are all watching and waiting to see the next step. Will the SAA make a decision to attack with full force to free the village? Or, are  they waiting for a foreign gov’t to make a decision to ‘call off the occupation of Kassab’? Also, perhaps the SAA are more concerned  and involved in the current ‘zero hour’ battle fields of central Homs, and Aleppo? Those 2 places are set to be attacked and freed very  soon. Homs and Aleppo are huge cities (#3 and #2 in Syria). Perhaps the Kassab occupation can wait it’s turn, in the eyes of the  military decision makers?  Meanwhile, the Armenian refugees at the church in Latakia are fed-up, frustrated and tired. They are eating well and in  safety. But they want to go home to their farms and businesses. They are worried their village will be off-limits for decades, and  maybe they should be making VISA arraignments now to take migration to Armenia, or America, or somewhere else. Here in Latakia, we are still getting hit by missiles from those same terrorists along the Syrian –Turkey border. They load the missiles,  shot them off, then run away. These are not the mortars you saw in Damascus, these are long range military grade missiles.”

Following are testimonies several of the internally-displaced, sheltering in an Armenian church in Latakia.

A young Armenian woman from Kasab (Kassab, Kessab) speaks of what happened in the early hours of Mar 21, 2014, when the Armenian populated village of Kasab came under attack by a volley of mortars and missiles, followed by insurgents who as she said “destroyed everything and raped our older women because they couldn’t find any girls.”

Rafi, an Armenian from Kasab, northwestern Syria, tells of the events of Mar 21, 2014, when insurgents fired mortars and missiles on Kasab, then invaded the village.

A displaced Kasab resident gives his thoughts on why the US and other democracy-delivering states have their hands in Syria.  Rough translation.

Syria is my love

Chechen jihadists in Syria: The case of Omar al-Shishani

Syria’s Kessab: The devastation of an Armenian safe haven

“Behold my friends, the face of ‘rebel’ ‘freedom’ and ‘democracy’. ” Commentary by Reverend Andrew Ashdown/ May 24, 2017

Whatever your beliefs, the destruction meted out in Maaloula, an ancient...