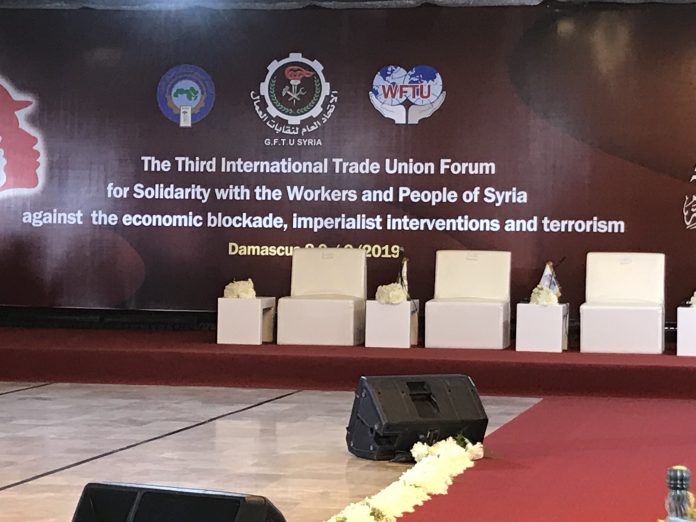 Greetings delegates and organizers.  My name is Mark Taliano. I am a writer and Research Associate at the Center For Research on Globalization (Global Research).

My book, Voices from Syria, and my website marktaliano.net represent my efforts to take a stand for civilization and the rule of international law against the barbarity that NATO and its allies have been imposing on Syria and its peoples.

I have not stood idly by and I will not stand idly by as Western governments and their agencies indoctrinate the Western collective mindset with criminal war propaganda.

Our resistance demands cohesiveness, a shared, truthful vocabulary that distinguishes us from the lies of the broad-based media. Our words are words of truth and justice, and clarity. Our words are not  isolated soundbites, fabricated to deceive. Our words are embedded in historical truths, historical contexts.

The globalizing war that the West is waging is not a War on Terror.  It is a War Of Terror. The West and its agencies support the terrorists in Syria. This is the truth.

The pre-planned NATO war of aggression against Syria is not a “civil war”. The term “civil war” connotes a false equivalency between both sides, an internal conflict. It is a war lie.

The Western -supported terrorists are chameleons with many names, and they include al Qaeda and ISIS. The Syrian people overwhelmingly reject them. The West supports ISIS and all the terrorists.  It is not going after ISIS. The “Caliphate Project” is a CIA Project.

Similarly, the notion that the war is a “revolution” is a lie. Western-supported terrorists displaced peaceful demonstrations, murdered government security personnel and others. It was an “intelligence” operation. Weapons and terrorists came from Libya and beyond.

READ MORE: Criminal War Propaganda Directed against Iraq and Syria: “We Think the Price Is Worth It.”

The so-called ”sanctions” that the West is imposing on Syria are criminal economic warfare. This warfare murders children, women and men.  Again, the intent is there.

“Moderate” terrorists never existed. Think about that one. It’s true.

When we use the same truthful nomenclature/word choice, just as mainstream media uses the same lying nomenclature, the people’s resistance becomes a more powerful humanitarian intervention. It is a  reality-based “intervention” that supports rather than destroys humanity.

I join with my colleagues here in a unified resistance against imperialism in all its forms, against colonialism, and against Zionism.

What the People Have Seen Can Not Be Unseen/ Commentary and Interview by Vanessa Beeley, July 31, 2019

The War of Terror on Syria Through Forensic Medicine – GRAPHIC/...