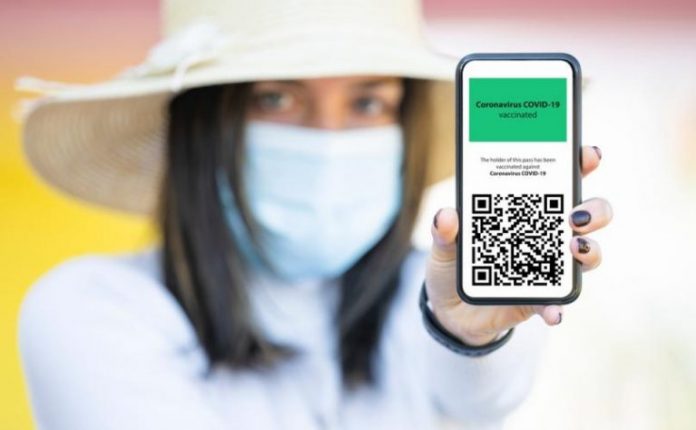 On March 25, 2021, the European Parliament voted 468 to 203 in favour of the Digital Vaccine Passport or “Green Pass” which requires EU citizens to get vaccinated if they want to travel, or even have access to various social and cultural activities within their respective communities.

The EU Digital Vaccine Passport is part of  theinfamous ID2020 project sponsored by the Global Alliance for Vaccines and Immunization (GAVI) “ which uses generalized vaccination as a platform for digital identity“.

Ironically, this historic vote –which is tantamount to the creation of a Digital Police State– took place barely a couple of weeks after 18 European countries including France, Italy, Germany and Spain decided to suspend the AstraZeneka mRNA vaccine.

In this regard, a collective of prominent medical doctors and scientists issued a statement addressed to the European Medicines Agency (EME) pointing to:

“serious potential consequences of COVID-19 [mRNA] vaccine technology, warning of possible autoimmune reactions, blood clotting abnormalities, stroke and internal bleeding, “including in the brain, spinal cord and heart”. (Urgent Open Letter from Doctors and Scientists to the European Medicines Agency regarding COVID-19 Vaccine Safety Concerns By Doctors for COVID Ethics, March 10, 2021Big Pharma, the IT Digital conglomerates, and their lobby groups not only influenced the debate as well as the vote in the European Parliament, they also pressured the EU political apparatus including the European Medicines Agency (EMA) to provide a green light to an “un-approved” and “experimental” mRNA vaccine coupled with a digital vaccine passport.

Were Members of Parliament informed regarding the vaccine related deaths and injuries? Or did they simply turn a blind eye?Official data compiled for three of the four major mRNA vaccine companies, namely Pfizer, Moderna and AstraZeneca. (Johnson and Johnson is not included) points to:

These figures correspond to the beginning of the most important vaccine program in World history, which if adopted will indelibly result in a significant loss of human life.

The longer term risks of death and injury (autoimmune reactions, blood clotting, stroke and internal bleeding, etc.) are still unknown. They will occur over a period of several years.

The European Commission has confirmed that 420 million doses will be delivered to the EU by mid-July, of which 70 million will be supplied by AstraZeneka. (France Soir Report)

The digital Passport is not compulsory. But if you don’t have it, you will be socially excluded. You will not be able to travel, and you will be excluded from “participating in important events” and “having access to public places” (e.g. sports, cultural events,  etc.), according to the EU Commission.

What is the choice presented to the citizens of the European Union.

Accept to be jabbed with a dangerous vaccine which consists in “gene therapy”, namely modification of the human genome.

Refuse the vaccine and be excluded from travel as well as a normal social life within your own country.

Amply documented, Big Pharma’s mRNA vaccines are dangerous. In the US, a  “Green Light” to market the experimental mRNA vaccine was granted back in December 2020, despite the fact that according to the FDA, the vaccine is an “unapproved product”.

The FDA in its ambiguous statement has provided a so-called Emergency Use Authorization (EUA) to the Pfizer-BioNTech vaccine, namely “to permit the emergency use of the unapproved product, … for active immunization…” (see below)

There is something fishy and “contradictory” in this statement. The experimental Pfizer mRNA vaccine is both “unapproved” and “permitted”. I have checked this statement with a prominent lawyer. It is blatantly illegal to market an “unapproved product”.

In the US, the Pfizer-Moderna vaccine is categorized by the CDC as an “investigational drug”. “The emergency use” clause is there to justify the launching of what might be described as an “illegal drug”.

Pfizer Has a Criminal Record. Is It Relevant?

READ MORE: “Fraudulent Marketing”: The Pfizer COVID-19 Vaccine Is an “Unapproved Product” which Is “Permitted for Use”

American pharmaceutical giant Pfizer Inc. and its subsidiary Pharmacia & Upjohn Company Inc. … have agreed to pay $2.3 billion, the largest health care fraud settlement in the history of the Department of Justice, to resolve criminal and civil liability arising from the illegal promotion of certain pharmaceutical products, … ” (September 2, 2009)

How on Earth can you trust a Big Pharma vaccine conglomerate which pleaded guilty to criminal charges by the US Department of Justice (DoJ) including “fraudulent marketing” and “felony violation of the Food, Drug and Cosmetic Act”?

We are not dealing with a civil lawsuit against Pfizer. In this 2009 DOJ Judgment, Pfizer was so to speak “Put on Probation”. Pfizer was ordered to enter into “a corporate integrity agreement” with the Inspector General of the Department of Health and Human Services (DHHS), acting as a de facto “Parole Officer”. “That agreement provided for “procedures and reviews to … avoid and promptly detect” (future) misconduct on the part of Pfizer, Inc.

At the height of the corona crisis, barely covered by the media, coinciding with the launch of the Covid-19 vaccine in early November 2020, Johnson and Johnson (and its three distributors) (involved in the marketing of prescription opioids)  “reached a tentative $26 billion settlement with counties and cities that sued them for damages”. The class action law suit was “the largest federal court case in American history”:

The settlement offer from opioid manufacturer Johnson & Johnson and the “Big Three” distributors, McKesson, Cardinal Health and Amerisource Bergen, potentially brings a large measure of legal closure for the companies and will funnel money to communities devastated by an addiction crisis that claims more than 70,000 lives in America every year.

It is worth noting that the US death rate resulting from drug overdose has more than tripled since the outset of the corona crisis in late January 2020.

Are these legal antecedents relevant to an understanding of Big Pharma’s vaccine initiative?

Johnson and Johnson is  currently involved in the production and marketing of a Covid adenovirus viral vector vaccine which also entails genetic therapy.

I should mention that the above J & J 26 billion dollar settlement is one among several law suits against J&J.

You decide whether you want to be vaccinated by Pfizer or J&J? In contrast to Opioids, the U.S. victims of vaccine deaths and injuries cannot sue the Big Pharma vaccine conglomerates.

“Now the court has comprehensively found that Johnson & Johnson are liable for the losses that these women have suffered,” … About 10,000 women have registered their interest in joining the class action, which Ms Jancauskas said made it the largest product liability class action in Australian history. (SBS Australia)

18 January 2021The original source of this article is Global Research

The Narrative is crumbling. United We Stand. Aus nationwide rally for...

UK Refuses to Suspend AstraZeneca COVID Shots as Other Nations Have...