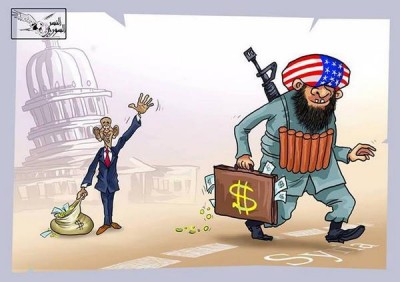 ISIS/Daesh have always been place-setters[1] for the U.S Empire and its Coalition of regime-change criminal cohorts.

Once Daesh is installed in an area, the area is destroyed and depopulated. Syrians flee from terrorist-held areas, to government -secured areas.

Now that the Syrian government and its allies are winning the just war against Western backed, sustained, and integrated terrorists, the West’s strategic use of its terror proxies is becoming more apparent.

Video satellite imagery reveals, for example, Western military installations ensconced in Daesh territory. This is normal, because the West and Daesh are comrades-in-arms.

The fact that the “Kurdish” SDF are transparently aligned with ISIS in Deir ez Zor should be of no surprise either, since the SDF are also aligned with the West and its allies, including of course Israel.

Sometimes the terrorists fight each other, but those who pay the salaries and enable the chaos and destruction of Syria are the overlords.

The dirty war exists because of the West and its allies and their regime-change partners. There is nothing humanitarian about it, and it is not a counter-terrorism operation. It is a pro-terrorism regime change/dirty war.

Iraq was super secular until the invasion of 2003. US did divide and rule like never before. Under Saddam every year all religious buildings, e.g., Muslim, Christian, Jewish, Yazidi etc. were granted equally funds from government to do needed repairs. One never heard of the sectarian terms anywhere – until the US invasion…[2]

The United States contributed to the formation of a new Iraq, doctrinal, sectarian, regional and regional, the foundations of the failed state, Christians were forced to flee and migrate to a more stable and secure world. In Syria, Christians living in areas controlled by the national government did not leave their homes, Along with the rest of the citizens, and in the areas returned by the Syrian Arab Army, the population returned to them, including Christians, despite migrating to more advanced places such as Europe, America claims to help the people, and in fact it seeks to destroy every country that wants to be free from the dominance of puppet system …[3]

Western populations should shed their illusions. Our governments are committing war crimes and imposing an overseas holocaust on non-belligerent countries. The West and its allies are terrorizing and destroying countries and they are falsely projecting their own high crimes onto their victims.

Selected Articles: How the US Supports Al-Qaeda

1 Mark Taliano, “The Islamic State as ‘Place-Setter’ for the American Empire. ISIS is the Product of the US Military-Intelligence Complex.” Global Research, 30 August, 2017.

Socialism for the Rich