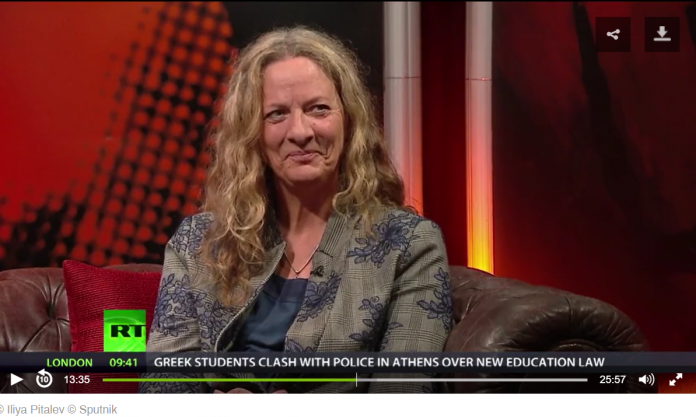 Evidence of Dutch and British funding for extremists who’ve beheaded children & carried out ethnic-cleansing grows by the day. Yet most of the mainstream media – including the BBC – still try to keep this truth silent.

Rutte initially tried to deny his involvement in the burial of the investigation but tenacious questioning from journalists forced him to admit his personal interference. According to Rutte, such an investigation could result in “tensions with our allies […] the lives of former members of opposition groups could be put at stake.”

Rutte’s protection of illegal armed groups wreaking havoc in Syria are reminiscent of the UK Government’s response to similar Parliamentary questions requesting clarity on the armed groups supported by its Foreign Office (UK FCO). The standard line is, “for security reasons, we do not disclose the names of those moderate opposition groups supported.”

This article will demonstrate that Rutte is very probably preventing tensions with the UK by quashing an investigation, and that the “moderate opposition” promoted by both governments actually consist of savage, extremist gangs who think nothing of conducting ethnic cleansing pogroms in Syria.

In 2018, Dutch officials were accused of providing equipment to terrorist groups in Syria. Equipment that included Toyota and Isuzu trucks that were, probably, later converted into machine-gun carriers by groups such as Jabhat al-Shamiya, considered a “Salafist” group by the Dutch Prosecution Service. This equipment was euphemistically described as non-lethal aid, a convenient caveat for governments ensuring the armed groups are given the means to recast this ‘aid’ into military hardware.

Dutch journalist Eric Van Den Beek has followed this affair from the outset. He wrote recently: “It’s a mystery why the Dutch Public Prosecution Office still has not launched a criminal investigation against current and former political officials who were involved in the support of Jabhat al-Shamiya.”

In October 2020, Dutch media reported that a former leader of a terrorist group operating in Syria had been receiving funding from the Dutch Foreign Ministry for years. The group, Ahrar Al Sham, was designated a terrorist organisation by the Dutch Court in 2019.

It is worth noting that Ahrar Al Sham merged with Nour Al Din Zinki in 2018, to form the “Syrian Liberation Front.” Zinki had been formerly funded as “moderates” by the US, but this aid was withdrawn after the group tortured and beheaded a 12-year-old boy, Abdullah Issa, in Al Ansari square, Aleppo in July 2016.

Incidentally, the square where this heinous crime took place was only 200 meters from the White Helmet center that featured in the Oscar-nominated promotional movie for the FCO-midwived, terrorist-linked organisation, “Last Men in Aleppo.” The Dutch government only withdrew funding from the White Helmets in 2018, citing lack of assurances that funds would not be funneled to terrorist groups in Syria. Up until this point, the Netherlands had given the White Helmets $14.5 million.

It was Dutch media that broke the story of the suspected involvement of the White Helmets founder, James Le Mesurier, in defrauding Mayday Rescue – the organisation Le Mesurier established to siphon UK and EU funding to his organisation.

The BBC has recently produced a 15-part radio documentary ‘probe’ into the Le Mesurier fraud allegation and the White Helmets. The “Mayday” series, produced by Chloe Hadjimatheou, turned out to be nothing more than an attempt to smear and discredit researchers, academics, scientists and journalists whose work has exposed the White Helmets to be an armed-group-auxiliary, an extension of power for the UK/US-led regime-change coalition, whose failed agenda is the removal of the Syrian government and President Bashar Assad.

Rutte’s denial of a rigorous and transparent investigation into Dutch sponsorship of terrorist groups in Syria is likely to be connected to the BBC-Mayday series and the FCO’s support for sectarian armed groups in Syria as part of an externally managed “political process.” A recent leak of FCO documents has revealed the extent to which the British government and intelligence agencies have been involved in extensive public relations and media operations to clean up the image of bands of war-crime-committing extremist groups.

This context is important to understand why the alleged financial support provided to the leader of Ahrar Al Sham by the Dutch Foreign Ministry, is very likely connected to the UK efforts to create a vast complex of PR and media back-up for these mercenary armed groups in Syria.

The former “foreign  affairs minister” of Ahrar Al Sham is a UK-educated, Spanish-Syrian called Labib Al Nahhas. Dutch media has reported that documents show that the country awarded two million euros in subsidies  to the European Institute of Peace (EIP), based in Brussels. Much of this funding went on to the Syrian Association for Citizens’ Dignity (SACD). Al Nahhas is the program director and he, personally, receives 700 euros per day, for an average of more than ten days per month as a senior consultant for EIP. This funding covers 2018-2021.

A recent article by journalist Kit Klarenberg revealed the role that Le Mesurier’s widow, Emma Winberg, played in the PR support for Syrian armed groups. Winberg was co-founder of Incostrat, a FCO-outreach agency funded by the Conflict Stability and Security Fund that also finances Mayday Rescue and the White Helmets. The BBC, curiously, made no mention of Winberg’s involvement in what is effectively a clandestine black-op run by the British government in an effort to destabilise Syria and to effect “regime change.”

Among the groups believed to be provided with PR and media support via Incostrat, are Jaish Al Islam, and, according to French journalist Thierry Meyssan, Ahrar Al Sham. In 2016, The Guardian ran a story on an “ex-UK student clock[ing] up air miles on mission to rebrand Syrian Islamists” (emphasis added). The Guardian admits that Ahrar Al Sham had fought in alliance with Nusra Front (Al Qaeda in Syria) and that their goal was to establish an Islamist theocracy in Syria. The Guardian also reports that one of the original leaders of AS had “personal connections with Osama Bin Laden.”

Al Nahhas had deep connections to the US, EU and UK, where he had established a tech company in a West London suburb. IKPA Communications Ltd was set up in October 2012 and apparently liquidated in 2014. Two other directors were named at Company House, Labib Shalak and Swedish-born UK resident, John Carl Gandeborn. This background builds the picture of someone who would be an ideal candidate for the UK FCO-sponsored agencies to promote as an acceptable frontman of an unacceptably sectarian, brutal armed group.

Al Nahhas resigned as director of his tech company in April 2014, the same year he joined Liwa al-Haq, a faction that merged with Ahrar Al Sham in late 2014. Al Nahhas was appointed Ahrar Al Sham’s “foreign minister” after the assassination of the majority of the armed group’s leaders in September 2014. This event is recorded in the leaked FCO documents, in a submission by Analysis Research and Knowledge (ARK) for the “Rapid Response” contract. ARK was also responsible for the creation of the White Helmets in Turkey and Jordan in 2013, with James Le Mesurier at the helm while an employee of ARK.

Turning a blind eye to outrages

Immediately after the largely unexplained assassination of Ahrar Al Sham leaders, Al Nahhas was despatched on a mission to secure US/UK/EU support for the armed group, visiting Western diplomats and publishing “opinion pieces” in the Washington Post and the Telegraph that called on the West to “engage with Ahrar Al Sham”. Former US Ambassador to Syria, Robert Ford, accused by Syrian officials of fomenting the armed uprising in 2011, joined the campaign (in 2015) to whitewash Ahrar Al Sham and to distance them from their alliance with Nusra Front.

The access and UK/US state-aligned-media support given to Al Nahhas and the timing of his moves to join armed groups fighting on behalf of the US Coalition in Syria, must lead to speculation that his role was managed by entities like Incosrat with the backing of the FCO and intelligence agencies. Ahrar Al Sham did not cease their ethnic cleansing atrocities in Syria despite the elevation of the group to “political process” status. In May 2016, just before Nour Al Din Zinki beheaded Abdullah Issa, Ahrar Al Sham and Nusra Front carried out the massacre of Syrian Alawite civilians in Zara, in the Aleppo governorate. The UK and US still refused to bow to pressure from Russia to designate Ahrar Al Sham a terrorist group.

Ahrar Al Sham’s involvement with the BBC dates back to the 2013 BBC Panorama report, “Saving Syria’s Children,” when the armed group escorted the BBC production team during the fabrication of what is suspected to be an elaborate hoax based on the forensic analysis of independent researcher Robert Stuart.

As late as 2017, it was reported that Kenan Al Nahhas, Labib’s brother, was appointed the new “political” leader of Ahrar Al Sham. At this time, the group was participating in the brutal siege and daily targeting of Shia Muslim Syrian civilians in the villages of Kafarya and Foua in Idlib. Ahrar Al Sham was also present, with Nusra Front, in Rashideen, Aleppo, in April 2017, when a terrorist suicide car attack massacred recently evacuated children and families from Kafarya and Foua.

The western campaign to rebrand and decriminalise this armed group continued unaffected by the war crimes they were systematically committing against the Syrian people. An opinion piece by Al Nahhas was published by The Guardian in February 2020. The Guardian has also been instrumental in maintaining the criminalisation of the Syrian government, an effort designed to corroborate the FCO’s “regime change” policy. The Guardian was drafted in to posthumously rebrand James Le Mesurier as a “mainstream saint” and was heavily involved in the White Hemet PR industry, alongside the BBC and Channel 4.

Al Nahhas allegedly distanced himself from Ahrar Al Sham in November 2016, but his brother stepped up to lead the armed group. While the Dutch officials involved in the financial sponsorship of a terrorist group profess ignorance of this, opposition members of Parliament say this suggests a lack of robust screening of recipients of government funding. This, combined with the 2018 revelations of the funding of Jabhat Al Shamiya, paint a damning picture of Dutch government involvement in the promotion and material support for violent, criminal armed groups involved in ten years of bloodshed in Syria.

In a curious turn of fate, Chloe Hadjimatheou, the producer of the BBC “Mayday” series, had been “the driving engine” behind a King’s College London, War Department, paper, entitled “The New Jihadism: A Global Snapshot”. The paper concluded that Ahrar Al Sham should be placed alongside Nusra Front and ISIS as a “Salafist,” in other words, a terrorist organisation operating in Syria.

Hadjimatheou refused to answer when asked if she subscribed to the view that the organisation that collaborated closely with the BBC Panorama team was deemed to be a terrorist group. It seems that the promoters, financiers and supporters of terrorism in Syria are not too keen to own up to their involvement in sustaining the illegal war against the Syrian people for ten years.

Palmyra: Interview with SAA Colonel on US Co-operation with ISIS/ ...