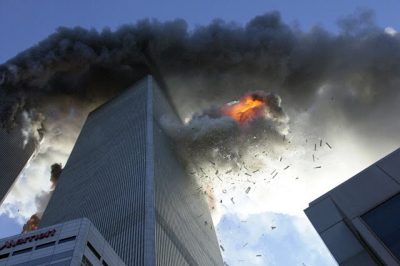 9/11 was a neo-con coup. To believe otherwise is to willfully suspend the laws of physics, and to reject historical facts and common sense. It requires a leap of misguided faith.

The mythology of 9/11 is destroying humanity primarily through an acceleration of permanent warfare and the normalized commission of supreme international war crimes, but also through a covert form of metastasizing totalitarianism, an inverted totalitarianism[1], that is suffocating North America with its war propaganda, its Homeland Security and Patriot Act, its ubiquitous spying, and the corruption of media messaging – all for the benefit of a publicly bailed-out “neoliberal” diseconomy.

David Griffin, in “BUSH AND CHENEY/ HOW THEY RUINED AMERICA AND THE WORLD” identifies and elaborates upon 15 miracles[2] implicit in the “official” narrative, and the Zelikow 9/11 Commission stories, that official narrative believers necessarily accept.  The list is as follows:

The official narrative assigns blame to al Qaeda, but al Qaeda, known and documented, are US proxies in Syria, Iraq, and beyond.  Blame lies elsewhere.9/11 and the WTC Towers: Why Do Self-styled “Skeptics” Believe in Their Own Brand of Miracles?

The Project for a New American Century, and the Anglo-Zionist plans for world hegemony should be demonized and rejected for what they are: a megalomaniacal global catastrophe.

The perpetuation of the 9/11 mythology leads us astray and diverts us from the causes of our own destruction.

[1] Sheldon Wolin, “Inverted Totalitarianism How the Bush regime is effecting the transformation to a fascist-like state.” The Nation, 1 May, 2003.( https://www.thenation.com/article/inverted-totalitarianism/?fbclid=IwAR2vMyxBnqq5u8e73qltIxC7TRZz6HYSFYU5VYv4nE7zX8xHtmRzarurAwc) Accessed 10 February, 2019.

Extensive War Crimes: Break Away From NATO by Invoking Article 13...