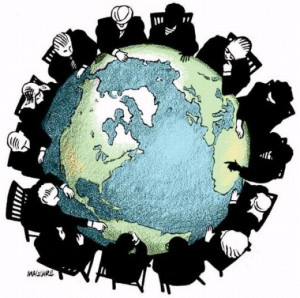 All governments use words freely to sell their deeds and misdeeds, but repressive governments do it with such regularity, that the words have basically become meaningless.

Historical perspective sheds light on the otherwise obscure origins on some of today’s pervasive nomenclature.

The “free market” theory originates from an economic theory of Milton Freidman and the Chicago school, and it was first implemented in Chile.

Essentially, the CIA orchestrated a coup that overthrew the democratically elected government of Salvador Allende in Chile, and replaced it with the infamous dictator Pinochet.

Then, for the first time, Freidman and his free-marketeers had a blank slate upon which to test their economic theory.  Interestingly, the testing field required repressive governance, otherwise the people would not have tolerated it.  Free markets and repressive governments make good marriages.

The story then unfolded much as it later did in other Latin American countries, with the populations controlled by fear: disappearances, torture, and a litany of horrendous crimes against the people.

The theory works best for the wealthy, but not for the majority, and it reinforces and enables repressive governments.  It also works well for transnational corporations that are now “free” to relocate where people can be exploited.  Free roaming corporations do not like regulation, unions, labour or environmental laws.

Basically, transnational corporations don’t like human rights either.  If corporations were actually human, many of them would be diagnosed as sociopaths, such is their distaste for human rights.

So, “free markets” thrive in an environment of “unfree” governments.  That’s the first contradiction.

This economic theory, which delights in totalitarianism, is sometimes called neoliberalism, sometimes neoconservativism, but it’s far removed from what liberalism used to mean, or from what conservatism used to mean.  Nor is it always aligned with the word “capitalism” It’s really about unfettered parasitism in many ways.

Capitalism, notes JR Saul, in Voltaire’s Bastards, should be aligned with production. People own shares or parts of companies as a way of financing companies and enabling manufacturing.  Now, thanks to the free-marketeers, it has become associated with speculation (i.e money markets, commodities, hedge funds), the same shadow banking

that led to the most recent financial crisis and the economic downturn.  Not only did the speculation create the crash that robbed untold people of their savings etc., but then the financial industry (including Canadian banks) were bailed out.  They were basically rewarded for being non-productive and parasitical.  This is the so-called free market where “private” corporations reign.  But, another contradiction, none of these corporations is private, because they are all subsidized, some more than others. So free, unregulated markets don’t free the people in any way, unless the term means the “liberation”of money from them.

What has happened to “private” ownership of small businesses?  Try competing with Walmart or Monsanto.  The “free” market has created huge transnational monopolies which basically strangle small businesses that are owned by people, rather than corporations.  And again, they survive where the social/people sphere is weak. That’s why so much manufacturing has moved to China.  Weak labour laws, weak environmental protections, and slave-like working conditions are a magnet for the “free” market (another contradiction).

It’s also why Harper Inc. is destroying our environmental laws, and attacking labour standards etc.  He wants to make Canada more “free”.  Manufacturing is an afterthought, because he knows it can be outsourced, and besides, the economic theory to which he is wedded doesn’t see that as a problem. It’s all about resource extraction and financial “services”.  Sound precarious?  Of course it is.  Resource industries are subject to boom/bust cycles, as are financial services.  His one trump card is a “precarious”: workforce of temp jobs, with no security.  But even that plan may be thwarted by the 99 and their unions who still prefer, for the most part, not to be exploited for the benefit of their corporate masters.

Bail outs and tax havens etc. don’t suffice though, so the “free” market, has a time-tested strategy.  The free market, after all, can not stop expanding.

First they divide and demonize: opponents are reds or lefties, statists or communists (never mind that China Inc is largely responsible for the evisceration of our environmental and labour laws).

David Climenhaga explains it this way:

Does it sound venal and repressive?  Of course it does, but that’s what market “freedom” is all about.

The global system of competition where the country with the cheapest of everything wins, and the system is crashing.  Austerity is the word of the day, but then “austerity” actually means “corporate bailout”.  Clamp down on the people more to pay off debt created by a “free” system.

Other economic models say that austerity only exacerbates the problem, but that’s not part of the global, free market economic business model espoused by governments such as Harper Inc.

Finally, we have the environment. Hurricane Sandy, which would have more aptly been named Hurricane Fossil Fuels, was systemically created by man-made global warming, as are countless other “natural” catastrophes.  Such “externalities” of the fossil fuel industry, the costs of which are increasing markedly, are being off-loaded onto the public sphere.  This is where the failures of unfettered free-markets are particularly egregious, especially since the fossil fuel industry is leading the war against science and the truth.

What to do?  First, we have to continue to identify, over and over, the cause of global warming. Next, as internationally best-selling Canadian author Naomi Klein explains, we need to create a People’s Shock to collectively pressure governments to responsibly address what is arguably the most important issue of our time.

Harper Inc., with its blind devotion to the fossil fuel industry, to the detriment of other areas of the economy, is not up to the task.  Neither are “unfettered” free markets which are dictating reckless policies and inhibiting our real freedoms as a people.

Let’s change the vocabulary, and see what happens.

Global Capitalism, “World Government” and the Corona Crisis When the Lie Becomes the Truth There is No Moving Backwards, By Prof Michel Chossudovsky, Global...

The White Helmets are “Black Helmets”, They are Al Qaeda And...

Who backs ISIS and how. By Prof. Tim Anderson/September, 2017

Towards A New World Order? The Global Debt Crisis and the...