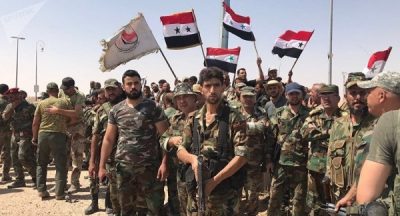 It should be clear to anyone who is paying attention that the war on Syria is not based on humanitarian issues.

It should also be clear that the war is not a War on Terror, since the Western-supported terrorist forces that existed in Syria, dubbed “the largest terrorist army on earth”, is estimated to have numbered almost 500,000 terrorists at its peak.[1]

Equally transparent is National Security Advisor John Bolton’s warning to Syria against the use of chemical weapons.  Political commentator Sarah Abdallah summed up Bolton’s signal for a CW false flag with these words:

Yeah. With nearly all of Syria liberated from terrorists and US troops illegally present on Syrian soil finally preparing to leave, Assad’s just going to launch a chemical attack and trigger a NATO response.

This only makes sense in the minds of endless-war-fanatics like Bolton.Reuters Top News✔@ReutersBolton warns Syria against use of chemical weapons https://reut.rs/2CReSeK 2,0463:21 PM – Jan 7, 2019Twitter Ads info and privacy1,212 people are talking about this

So, can we expect another false flag attack?

Given what we already know about the White Helmets’ involvement in organ harvesting, kidnapping, thievery, fake news, staged rescues, and assorted terrorist activities[2], their anticipated involvement in preparations for yet another false flag attack is credible.

As Canadians we must demand an end to our government’s war on Syria. Canada should open its Embassy in Syria and resume diplomatic relations. Furthermore, Canada should leave NATO. And Canada must be held to account for the crimes that it has committed against the sovereign nation of Syria, and for the crimes that it continues to commit against the sovereign nation of Syria.

Normalized permanent warfare and support for terrorism is madness. To borrow a concept from How the US Creates “Sh*thole” Countries,[3] not only are we destroying countries as policy (i.e Ukraine, Libya, Iraq, Syria and beyond), but in so-doing, we have already earned for ourselves permanent residency in the Sh*thole Hall of Infamy.

READ MORE: Cutting Through the War Propaganda. Listen to What Syrians are Saying

[3] Edited by Cynthia McKinney, How the US Creates “Sh*thole” Countries, Clarity Press, 2018.

The History of “Humanitarian Warfare”: NATO’s Reign of Terror in Kosovo, The Destruction of Yugoslavia/ By Prof Michel Chossudovsky Global Research, March 27, 2016...