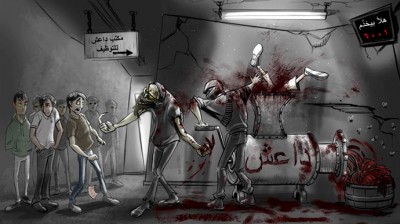 Each attack was for the benefit of ISIS terrorists. The direct attack on SAA soldiers at al-Tharda Mountain allowed ISIS terrorists to quickly occupy the strategic location, and the recent false flag attack provided a fake pretext for the U.S to launch a (poorly planned and executed) attack on the Shayrat air base — a facility used by the SAA to attack ISIS positions.

In fact, the entire terrorist infrastructure is strengthened with each and every initiative taken by the West and its extremist allies against the legitimate, elected, secular, socially-oriented, Syrian government.

Another conference participant explained in an interview that

In the case of Syria, they (sanctions) have compounded the deteriorating context by strengthening economies of plunder and acting as a bonus for groups such as ISIS, among other Islamists. These groups successfully recruit from unemployed youth, many of whom are from destitute families, where the main breadwinner has been killed or injured. The experience of Syria over the past five years is well documented in a series of reports from the United Nations Development Programme and the Syrian Center for Policy Research (SCPR).

The legitimate Syrian government, on the other hand, not only opposes terrorism, but also has an effective apparatus of “reconciliation” that addresses and remediates the cancer of Western terrorism.

(t)he work of reconciliation groups is evident from the many successful treaties secured between the government and armed groups. Although many treaties only resulted in a temporary halt of violence, some secured longer term peace in specific areas, such as the Homs old city and Al-Waar treaties, which were a joint effort between local and national reconciliation groups. Many more treaties were negotiated in Damascus, Daraa, Aleppo and Hama. Overall – More than 8500 deals treaties were discussed during the last 5 years across Syria. – Over 1220 resulted in signed treaties with varied degrees of success! – Some were UN approved! – In the area between Homs and Rastan- more than 20 SMEs returned to work (Tailoring, Sweet and Chocolate factories, metal factories- metal melting factories – 5500 prisoners released – Over 8000 Abducted people have been freed, through facilitated prisoners’ swaps. – humanitarian aid supplies allowed, evacuation of civilians from conflict zones made possible, and disarmament of local fighters peacefully achieved. – An archive for missing people has been established. Approx. 90,000 total missing cases have been recorded for both side.

The Virus has not been Isolated