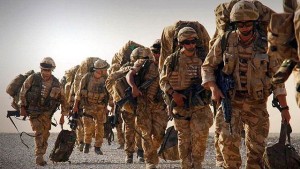 The West and its allies support terrorism. This is known and documented and obfuscated and omitted and denied by mainstream media narratives, all of which serve as propaganda organs for dark state megalomaniacs infesting Washington.

In its grand design to impose full spectrum, total control over the globe, U.S-led NATO is destroying humanity and the rule of international law on a daily basis, committing the supreme international crime of aggression, as outline by Nuremburg Principles.

In its wake, the West destroys countries and human rights with intent.

The notions of “humanitarian interventions” and “Responsibility To Protect” are fake covers to sell wars of aggression, to destroy human rights, to impose misogyny, to destroy and colonize political economies, to impoverish, to create cheap labour markets, and to plunder.

Professor Michel Chossudovsky explains the genesis of these proxies in “Al Qaeda and the ‘War on Terrorism’ “:

In 1979 the largest covert operation in the history of the CIA was launched in Afghanistan:

“With the active encouragement of the CIA and Pakistan’s ISI, who wanted to turn the Afghan Jihad into a global war waged by all Muslim states against the Soviet Union, some 35,000 Muslim radicals from 40 Islamic countries joined Afghanistan’s fight between 1982 and 1992. Tens of thousands more came to study in Pakistani madrasahs. Eventually, more than 100,000 foreign Muslim radicals were directly influenced by the Afghan jihad.” (Ahmed Rashid, “The Taliban: Exporting Extremism”, Foreign Affairs, November-December 1999).

This project of the US intelligence apparatus was conducted with the active support of Pakistan’s Inter Services Intelligence (ISI), which was entrusted in channeling covert military aid to the Islamic brigades and financing, in liaison with the CIA, the madrassahs and Mujahideen training camps.

Julie Levesque adds in “From Afghanistan To Syria: Women’s Rights, War Propaganda and the CIA”that

(i)t was the US which installed the Taliban regime in Afghanistan in 1996, a foreign policy strategy which resulted in the demise of Afghan women’s rights:

Under NSDD 166, US assistance to the Islamic brigades channeled through Pakistan was not limited to bona fide military aid. Washington also supported and financed by the U.S. Agency for International Development (USAID), the process of religious indoctrination, largely to secure the demise of secular institutions.

The recent terrorist attack against innocent civilians being transported out of Fua and Kefraya, located in the largely terrorist-occupied area of Idlib, is the work of NATO’s terrorists.

NATO and its dark state manipulators in Washington want war and chaos, not peace.

The explosion of the MOAB bomb in terrorist-infested Afghanistan also serves these dark, criminal agendas.

The bomb’s target were CIA –built tunnels, formerly used by Western-supported, drug-trafficking “Islamic” terrorists when the West was illegally combating the Russian-backed secular government in Afghanistan.

The explosion, like the mass-murdering bombs dropped on civilians in Nagasaki and Hiroshima, is a warning to the world of law and order and human rights that the West intends to continue its agenda of world domination and destruction for the perceived benefit of transnational oligarch classes.9/11 Truth: Who Is Osama Bin Laden?The original source of this article is Global ResearchCopyright © Mark Taliano, Global Research, 2017

Canada Supports The ISIS and Every Other Terrorist Group which is...