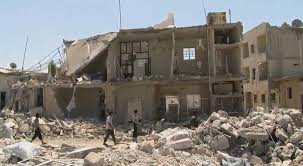 Corporate media messaging about the war on Syria is corrupt to an unprecedented level, despite years of sustainable evidence that contradicts the lies.

The “West”, including U.S.–led NATO, the Persian Gulf Monarchies, and Israel, are waging a proxy war against Syria. ISIS or Daesh is the designated enemy, but it has long been (publicly) acknowledged that the real enemy is President Assad of Syria, not ISIS.  All of the invading, un-islamic mercenary terrorists are the West’s “strategic assets,” including ISIS. Engineered islamophobia is all part of the Western psy- op to demonize all Muslims, to create fear, to create racism, and to create hatred — vital components for illegal wars of aggression.

We have witnessed Empire’s genocidal handiwork in Iraq, Libya, Ukraine, and beyond – all part of a neo-con project for global dominance, globalized war, and globalized poverty, but Syria and its allies, including Russia and Iran, have seemingly drawn a red-line with Syria. Empire’s unipolar ambitions are being frustrated on Syrian soil.

The war is not a “clash of civilizations” as some warmongers might profess; it is a clash of one civilization, Syria’s, against Western barbarism.

Criminal mainstream messaging, however, has created a state of mass political imbecilization amongst Western media consumers.  In a classic case of “reverse-projection”, people’s engineered perceptions present President Assad and Syrians as the “bad guys”, while the invading terrorists are viewed as the “good guys”.

Repeated messaging of these false narratives, coupled with sophisticated confusion-mongering, continues to weld these lies into the collective political consciousness of Western media consumers.

How did the “Establishment” orchestrate such a coup?

Ostensibly “neutral” information sources are not neutral at all. So-called “Non-Governmental Organizations” (NGOs), including very governmental sources such as the National Endowment for Democracy (NED) the CIA, Mossad etc. as well as oligarch (ie Soros) funded foundations, are all embedded with the terrorists, and these are the sources that are the foundation for corporate/mainstream media (MSM) “news” stories.

The White/al Qaeda Helmets, the Syrian Observatory for Human Rights (SOHR), and Avaaz are just a few of the many corrupt NGOs lying about the War on Syria. Add to this Qatari -based Al Jazeera, and Western media’s modus operandi of trotting out “experts” who have conflicts of interest  but who nevertheless pose as “neutral” sources of information, and we see that the media serves as an agency for imperial war, rather than as an agency for truth and justice.

Meanwhile, voices of truth, justice, and peace are suppressed.  Writer/Professor Tim Anderson, an expert on the war, and author of The Dirty War on Syria (click right image to order directly from Global Research), recently posted these words:

In my country (Australia) we have seen five years of a near monolithic war narrative on Syria, and associated wartime censorship of dissenting views. Although I have probably written more than any other Australian academic on the conflict in Syria, I have been effectively black-listed from the Australian corporate and state media, because what I say does not fit the official line.

Not only are the lies enabling the siege of Syria and its peoples, but they are also propelling us blindly towards a possibly cataclysmic nuclear war against Russia and its allies.  The stakes are high, and there are ominous forebodings that Washington-based warmongering circles – namely, the Military Industrial Complex (MIC) – are intent on provoking the unthinkable — cataclysmic nuclear warfare.

The “Strategic Deterrent Coalition”, a non-profit organization, with funding from war-profiteering companies such as Boeing, Northrop Grumman, Orbita AK, and BAE systems, is one such “circle”.  It aims to “educate” decision-makers and “build a consensus” in favour of the “pre-emptive”/first strike use of nuclear weapons.

The jargon sounds almost benign, but the premise upon which the fear-mongering is based is patently absurd.  Prof Michel Chossudovsky explains in “ ‘The Doomsday Forum’: Senior Military, Nuclear Weapons Officials Convene… America’s ‘$1 Trillion Nuclear Weapons Plan’. Take out Russia, Iran and North Korea? “ :

Theater of the absurd: the US is intent upon using nuclear weapons as a means of self defense against Al Qaeda and ISIS under the Administration’s counter-terrorism initative:

And the United States is part of an international campaign against violent extremist organizations groups ‘seeking to destroy our democratic way of life.’

To effectively keep adversaries and potential adversaries in check, America must maintain ‘a safe, secure, effective and ready nuclear deterrent.’

Lest we forget, Al Qaeda was created by the CIA and the ISIS is supported and funded by two of America’s staunchest allies: Turkey and Saudi Arabia.

In fact, the entire “War On Terror” constitutes the “Theater of the Absurd”, since it is well- documented that the stated enemies of the “West” (ie al Qaeda/al Nusra Front, ISIS, and all the terrorists invading Syria) are supported by the West, the Gulf Monarchies, NATO, and Israel.

As a first step, we would do well to boycott toxic mainstream media (MSM) messaging, which favours lies, injustice, and war.

(This is an expanded, edited version, of an article which appeared at Russia Insider)

How We’re Misled About Syria: UK Propaganda and the BBC/By Tim...

Bread and Circuses, Clowns and Imposters. “Syria Face to Face”