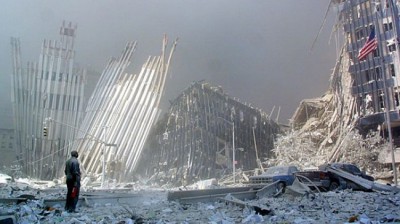 We are living in a society where dangerous political ignorance prevails, and truth is subordinated.

“Forbidden truths” are concealed beneath the protective cover of a growing array of taboos.  The taboos protect the criminal warmongers and the oligarch class, as they corrode peace, equality, freedom, and prosperity.

Despite the preponderance of strong evidence that the 9/11 catastrophe was a false flag, those who question the ever-changing official narratives are dismissed as “conspiracy theorists”. Open discussions are replaced by ad hominem attacks, or straw man arguments that are thought to neutralize dissent and make the truth go away. The repetition of these logical fallacies, especially the “conspiracy theory” label, then serves to conceal the truth within the walls of the taboo.  The CIA is well-versed in these psychological operations, and the masses willingly and gullibly take the bait every time. Writer Paul Craig Roberts cleverly reverses the psy op and wonders if those who refuse to hear the truth are “CIA stooges”.

The 9/11 taboo continues to provide cover for criminal invasions masquerading as “counter-terrorism”, and the “Global War On Terror”.  It continues to shield the public from the known and well-documented truth that the West is expanding the reach of terrorism globally by using mercenary terrorists as proxies to destroy and occupy non-belligerent countries such as Syria.

Everything that mainstream media (MSM) vomits about Syria is false, yet the public rarely thinks critically about the messaging, despite the on-going deceptions and genocides of all the post-9/11 invasions.

False flags are the spark that begin previously-planned invasions, and they always have been.  Invasions take time to plan and prepare.  The illegal invasion of Afghanistan, for example, launched almost immediately after the 9/11 carnage, was not a spur of the moment decision.  Prof Michel Chossudovsky explains in “September 11, 2001: The War Crimes Committed ‘In the Name of 9/11’:

“Military analysts will confirm that a major theater war takes months and months, up to a year or more of advanced preparations. Confirmed by press reports, the war on Afghanistan was already in an advanced state of readiness prior to September 11, 2001, which begs the question of foreknowledge of the 9/11 attacks.”

Instead of relegating open discussions about false flags to the sidelines, shows such as “False Flag Weekly News”, featuring Profs Kevin Barrett and Anthony Hall, should be front and center.  But the taboo prevents this from happening, as elements within our deluded society emerge to suppress the show and its commentators. Hall’s recent suspension without pay from his tenured position as Professor at the University of Lethbridge, Alberta, Canada, seems emblematic of this suppression.

Those in the Academy who seek to further the cause for peace and international justice, as evidenced by Hall’s books, The American Empire and the Fourth World: The Bowl With One Spoon, Part One (McGill-Queen’s Native and Northern Series) and Earth into Property: Colonization, Decolonization, and Capitalism (McGill-Queen’s Native and Northern Series) are seemingly targeted, even as schools such as the Munk School of Global Affairs  — the namesake of which  elicits connotations of predatory economic practices, and predatory forms of globalization – capture positive mainstream attention.

All of this protects and enriches the criminal warmongers and the oligarch classes, to the detriment of peace, justice, and stability.  Those who seek the truth and open discussion about transformative events are seeking peace, not war, and yet (ironically), they are the ones who are condemned, not the criminal warmongers. Taboo topics also serve to maintain the political status quo at the highest levels.  Geopolitically, most areas are off-limits, so political campaigning is increasingly nonsensical, even absurd.  Third party candidates such as Jill Stein are almost “disappeared”, and the focus is seemingly on the allegations of personal deeds or misdeeds of the lead players: currently Donald Trump and Hillary Clinton.

Evidence-based political analysis is shelved — commentators who might be critical of Apartheid Israel must first survive labels such as “Anti-Semite” or “Holocaust Denier”, each as effective in its own way as the “Conspiracy Theory” label, so important topics are excluded even before the debates and the campaigns begin.

And there is nothing new about this.  Howard Zinn, in A People’s History Of The United States quotes Henry Adams, a nineteenth century commentator who wrote to his friend about the presidential election:

“We are plunged in politics funnier than words can express.  Very great issues are involved  … But the amusing thing is that no one talks about real interests.  By common consent they agree to let these alone.  We are afraid to discuss them.  Instead of this the press is engaged in a most amusing dispute whether Mr. Cleveland had an illegitimate child and did or did not live with more than one mistress.”

The choice is ours.  We can continue on this path that leads us from one catastrophe to another, including permanent and increasingly dangerous warfare, or we can break some taboos and reject the status quo.  The latter choice is more life-enriching.