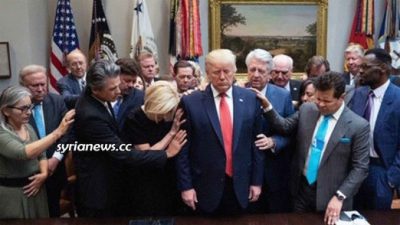 US President Donald J. Trump took time from his domestic fight of battling COVID-19 single-handedly and with one arm tied behind his back to set fire to Syrian wheat fields in Hasakah governate. He performed the ritual of the double-war crime — torching farmland and illegal bombing of a foreign nation — on the Christian sabbath.

Deuteronomy 20:19 prohibits the destruction of that which yields food, even during times of war.

War against Syria has not been declared; Trump has engaged in a secular war crime and has spat upon a biblical commandment.

The Trump regime American illegals in the SAR dropped several incendiary bombs on the wheat farmlands “in the countryside of Shaddadi, south of Hasakah,” destroying more than 200 dunams (around 50 acres) of Syrian wheat crops, local sources told SANA reporter.

An illicit US Apache helicopter “flying close to the ground” dropped several thermal balloons onto the wheat fields. Despite its cute name, these are small bombs, equipped to function as large Molotov cocktails (those watching the success of Operation Mockingbird may notice that the joy of children playing with balloons has been put on the list of fun things to be expunged, because of environmental issues, yet those with their minds in chains do not notice demonic bombs used to destroy the sustenance of life — wheat fields — merrily get to use the word, “balloon.”

Trump illegals in their military aircraft have also engaged in psychological warfare operations against Syrian civilians and farmers in this region, sadistically and war criminally approaching people’s homes and farmlands, terrifying Syrian children, as part of a Satanic plot to ethnically cleanse this area of Syria, and replace indigenous Syrians with an assortment of Madman Erdogan mercenary terrorists, and Obama-created and Trump accelerated cannon fodder traitor separatists re-marketed as the SDF. The NATO klansmen running the United Nations — and their House Servants — are 100% on board with this ethnic cleansing, which is a war crime, using the coronavirus pandemic as “health terrorism” against the Syrian Arab Republic.

Featured image is from Syria News

The original source of this article is Syria News

We’re being locked-down for an Infection Fatality Rate of less than .2%??