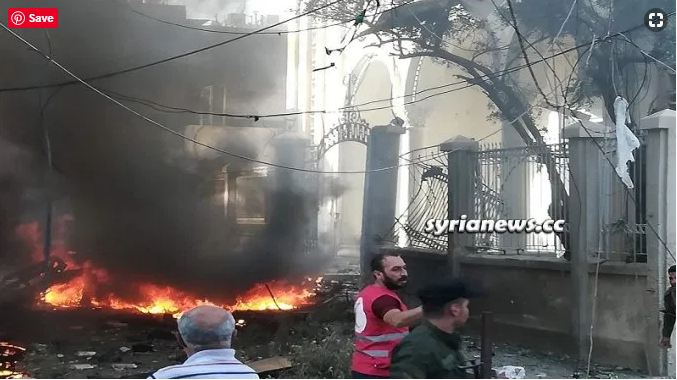 The Trump regime’s SDF mercenaries continue to engage in the ethnic cleansing of indigenous Syrians from the Qamishli area of the Levantine republic. Local news has reported another attempted bombing of the Church of the Virgin Mary along with two other, unnamed churches, and the closure of fourteen Christian schools in the northeastern region of the country, under the protection of American illegal military troops.

Though the NATO-armed SDF (Arabic acronym, Qasad) militia is claimed to be Kurds yearning to breathe free, the traitorous separatists have merely been cannon fodder under an umbrella gang of foreign wetworkers from various NATO countries, under the protection of war criminal US military. The murderous fodder against Syrians were originally the YPG, but as this gang of thugs is on America’s terrorist list, Pentagon leaders under Obama declared a new name was required, to better market these thugs who have kidnapped Syrians, torched Syrian wheat fields, slaughtered Syrian law enforcement. In short, these terrorists are attempting to ethnically cleanse native Syrians from their land.

On 1 July, as a preemptive threat against the probability of Russia and China thwarting an extension of the new Sykes-Picot UN/NATO Treaty, Trump’s ambassador Kelly Craft warned of [more] mass graves in the S.A.R. should the NATO dictum not be accepted. Almost immediately upon the expiration of Security Council Resolution 2504 (2020), news came of another impending false flag chemical attack by al Qaeda operatives occupying Idlib, along with a strange blackmail attempt by certain al Qaeda factions against American illegal Bilal Abdul Kareem — the release of his degenerate, naked selfies (which the friend of child beheaders subsequently referred to as family photos) — the same terrorist faction which recently abducted Tauqir ‘Tox’ Sharif, Brit illegal from a Syrian home which he and his also English wife had been occupying.

Demonstrating the utter arrogance western colonialism — even while NATO countries hypocritically decry US racism, and westerners continue to feign concern over the brutal murder of George Floyd, using his death as a cover story to break from the COVID-19 lockdown — imperialist pathogenic illegals in Syria claim that the church was bombed by ISIS.

That there is no such place as Rojava is of no concern when it comes to the rancid white man’s burden to impose empire on nation-states. A gaggle of NATO operatives — represented by a Brit, an American, and a Frenchie — have been squatting in northeast Syria since 2018, and have created the imperial Rojava Information Center, a NATO independent “media bridge” from the separatist, Israelized, Kurds, to the “outside [NATO] world” (because ordinary Syrian Kurds could never run their own newspaper, without NATO operatives).

The war criminal hypocrisy of such humanitarian bastards is a bottomless pit of depravity. Ignoring the fact that the US armed SDF previously blown up vehicles near the Church of the Virgin Mary, that they have stolen Syrian homes and kidnapped Syrian children, forcing them into criminal conscription, this NATO-sponsored gang under the protection of the Trump regime illegals in the SAR, have ironically claimed that the US-created ISIS committed the bombing in Qamishli to disturb the Garden of Eden enjoyed by the US-created SDF and Muslim Arabs and Arab Christians trying to break free of their native country. The vicious sadism of this colonial criminality is further flouted in the incestuous reporting on the ‘RIC’ by the Defense Post/Global Post NATO independent sites created by a Turkish student who allegedly came to the US to study but decided to stay.

Let the western world not be fake concerned over domestic racism while flouting support for peak colonialism.

Let Trump’s imperialism in Syria be brought to an end.

Libya: From Africa’s Wealthiest Democracy Under Gaddafi to Terrorist Haven After US Intervention/BY GARIKAI CHENGU, OCTOBER 20, 2015

The West Supports ALL of the Terrorists in Syria.