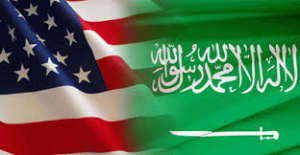 Saudi Arabia is a chief weapons dealer and financier to the terrorists in Syria – all in coordination with U.S –led NATO.

The amended project Timber Sycamore details explicitly that the U.S trains and provides lethal assistance to terrorists and that Saudi Arabia provides money and weapons.

Canada, with its military hardware deal with the Kingdom of Saudi Arabia is also guilty.

Saudi Arabia is a tyranny where women aren’t allowed to drive motor vehicles, but that is irrelevant since human rights are anathema to the West’s support for anti-democratic head-chopping terrorists.

Any country that represents democracy and sovereignty and independent decision-making.  Any country that chooses to use its resources for the benefit and uplift of its citizens – a country such as Syria for example (or Libya, or Honduras, or Venezuela, or countless others) is subject to find itself at the receiving end of the West’s terror campaigns.  This is the evidence-based reality.

The decision to pursue criminal warfare in alliance with the most reprehensible regimes to satisfy the wishes of often un-elected dark state megalomaniac cabals — and to spread death, poverty, and terrorism globally – contradicts everything that is sane and Life-enhancing.

Ask any Syrian. They know first-hand what it’s like to be victimized by NATO’s sectarian, anti-democratic terrorists, by illegal terror sanctions, and by criminal bombing campaigns that target civilians and civilian infrastructure.

Any political economy such as ours, that requires vast outlays of public monies to support a Life-destroying globalized agenda, is surely a system that is best suited for the trash can.

Information Doctors Have Died For with Dr. Carrie Madej | Flyover...

Not Going after ISIS, Killing Civilians as Military Doctrine