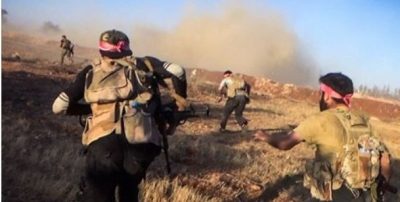 On the heels of an evidence-free “atrocity” allegation leveled against Syria and Syrians, yet another in a long list of stories used as fake pretexts to escalate criminal warfare and support international terrorism, U.S-led NATO is finding it increasingly difficult to climb down from its tree of lies.

Despite its best efforts, and increasingly creative cover stories, the West’s on-going support for terrorists in Syria most recently emerged when it refused to designate a newly-branded al Qaeda-affiliated group – Hay’at Tahrir al-Sham (HTS) – as a terrorist group.

(t)he reasons for the reluctance to list the new al-Qaeda formation may have to do with one of its new members, the Nour ed-Dine Zenki Brigade, a jihadi group from the Aleppo governorate.

The Zenki Brigade was an early and prominent recipient of U.S. aid, weapons and training.

Zenki was cut off by the State Department only after Amnesty International implicated them in killings of Orthodox Christian priests and members posted a video of themselves beheading a young boy.

For the U.S. to designate HTS now would mean acknowledging that it supplied sophisticated weapons including TOW anti-tank missiles to “terrorists,” and draw attention to the fact that the U.S. continues to arm Islamist militias in Syria.

In other words, if the West were to acknowledge that HTS (al Qaeda) is a terrorist group, then the Western war criminals would be admitting to their own complicity. And NATO, like the CIA, tries conceal its criminality beneath the cover of “plausible deniability” whenever possible.

All of this is consistent with the West’s on-going propaganda campaign against Syria.  The fake stories, the false flags, and the evidence-free demonization campaigns have been known and documented for years. Prof. Tim Anderson’s new e-book, “Countering War Propaganda of the dirty war on Syria” documents it all in an easy-to-read infographic format.

All of this underscores the West’s on-going support for international terrorism in its campaign of globalized war and poverty.

And all of this highlights the irony that the same terrorist group that supposedly flew airplanes into the World Trade Center buildings and the Pentagon – al Qaeda – is U.S –led NATO’s proxy in Syria.The West is Responsible for Terrorism in SyriaThe original source of this article is Global ResearchCopyright © Mark Taliano, Global Research, 2017

Press in His Pocket: Bill Gates Buys Media to Control the...

A “Peace Train” is Rolling Through Syria…