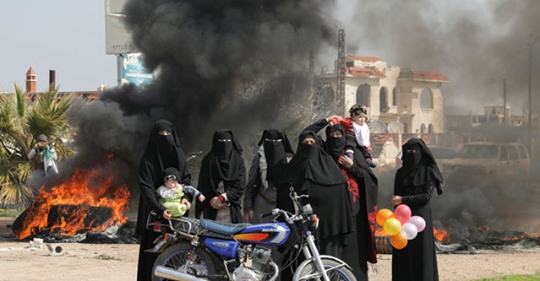 From Brussels, U.S. envoy James Jeffrey and Ambassador David Satterfield issued a “cease military advancement or else” threat to Syria’s president. They made it clear that America’s goal is to prevent Syrian government military victory in all of Syria in order to ensure leverage for “regime change. ”

The Syrian people suffered nine years of war, destruction, death, economic sanctions and propaganda lies at the hands of Western elites. It began in 2011 when the Obama administration supported the violent Muslim Brotherhood overthrow of secular Middle East presidents. After the fall of Egypt and Libya, Obama covertly funded CIA military training and equipment for al Qaeda mercenaries to invade Syria. It was never a “civil war. ” U.S. elites and media collaborated on the grand deception. America’s “rebel” allies were al Qaeda terrorists all along. Their atrocities were blamed on the Syrian government army.

The SAA is comprised of Syrians of all walks of life and religions. They are protecting their homeland. Syrians don’t want their president overthrown nor a Western-supported al Qaeda takeover. The West needs to “leave them be.”

We are Currently Not Measuring the Incidence of Coronavirus Diseases, but...