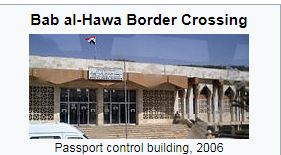 But what is the Bab al-Hawa crossing?

It is one of the main sources of income for Hayaat Tahrir Al-Sham aka Al-Nusra Front, with a guard force exceeding 400 militants, each with a monthly salary of at least $ 300.  A Syrian Arab Army soldier receives around $ 40 to defend his country against the invasion of these US Coalition/Turkey backed militias.

Hundreds of trucks loaded with commercial goods of various types and oil derivatives enter and exit to and from Turkey through “Bab Al Hawa” 24/7, paying the fees for the crossing to Al Qaeda.

As it is also the center of a huge contracting company, working in the field of construction, buying and selling real estates, in addition to managing the crossing itself and the free market Inside of it, which also contains halls, training and development centers, and places designated for the rest of HTS officials with all the luxuries.

In short, the crossing alone is the source of an estimated $ 10 million per month, and it is only one of several enormous sources of income for HTS and their leader, al-Golani.

More information and details about HTS to be published very soon ..

The video shows trucks loaded with oil derivatives entering through Bab Al-Hawa crossing on the 4th of December 2019.

The People Are Unaware of the War Being Conducted Against Them/...