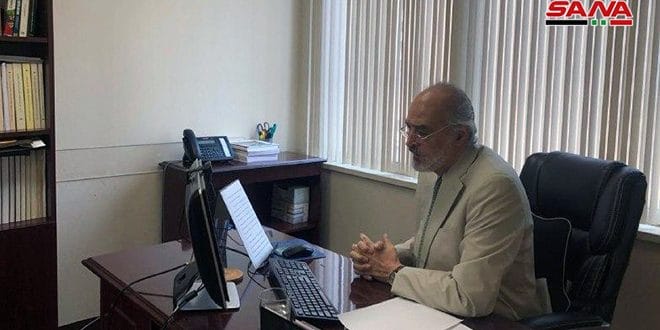 With the blessing of the American Administration and its tools, the Turkish occupation forces and their proxies, have cut off the pumping of drinking water from Allouk station and the wells feeding it more than /16/ times and for varying periods, the last of which extended for more than twenty days, which caused the suffering of our people in al-Hasakah.

Mr. Lowcock, who is supposed to represent the human face of the United Nations. Mr. Lowcock – who instead of condemning the crimes of the Turkish occupation in his briefings – has previously, before this very same Council, thanked the Turkish regime for its facilitation of sending a technical team to repair the Alouk station, ignoring that the Turkish regime bombed the station and attacked its workers, expelling them, as it launched what was called “peace spring operation”.

We have the right to ask: If Mr. Lowcock is biased and incapable of taking professional, objective and credible positions, why did the so-called Humanitarian Co-pen Holders in this Council not take action to hold sessions and adopt at least one presidential statement condemning Erdogan’s targeting of the civilian Allouk water station and his use of water as a weapon to punish civilians?

These self-proclaimed-co-penholders, and those behind them, are clearly loyal to NATO and its aggressive policies that show zero respect for international law, the United Nations Charter, and human rights.

Such disrespect has been demonstrated on an ongoing basis, as no voices were raised when the attacks of the American occupation forces caused severe damage to the Euphrates and Baath dams, energy and water plants, and the famous suspension bridge in Deir Ezzor, in addition to other civilian facilities.

Also, their voices were not raised when- On march 27th, 2017-the illegitmate “coalition” airforce targeted a vehicle carrying a team of technicians who supervise the Euphrates Dam, and volunteers from the Syrian Red Crescent, when they were trying to reach the dam to repair the damage caused by the US bombing and prevent its collapse.

Two days ago, the “International Coalition” acknowledged its responsibility for killing 1377 civilians during its hostilities, considering them as “collateral damage”. Of course, the numbers exceed this number exponentially, but the matter will pass unnoticed as long as Germany and Belgium are the two entrusted humanitarian co-penholders in this Council. Therefore, international law has become like the gentle lamb whose care is entrusted to a herd of wolves.

I would like to draw your Council’s attention to a study published a few days ago by the “CANS New American Security Center” funded by the US Government. This study is by Nicholas Heras, a researcher at the center and previously in the Pentagon. It calls on Washington to weaponize wheat to starve civilians in Syria in order to reduce food supplies and pressure the Syrian government and Russia to make political concessions that serve US interests in the region. This twisted logic of using wheat as a weapon to punish civilians is consistent with Erdogan’s use of water as a weapon to punish civilians.

Some of the Governments of the Member States of this Council have slaughtered international humanitarian law in their policies towards my country just as they slaughtered its biological father, that is, international law- before it.

Over the past years, some Governments of Member States of the Security Council have dealt with the humanitarian situation in my country with blatant selectivity.

This selectivity has manifested itself and continues to be manifested by their politicized focus on certain areas to protect the remnants of the terrorist organizations that control them.

This selectivity also aims at preventing the Syrian Arab Army and its allies from liberating them from terrorism. At the same time, those Governments deliberately overlooked the catastrophic humanitarian conditions experienced by the Syrians in other areas occupied by the American and Turkish forces and the crimes of their tools of proxy separatist militias and terrorist organizations.#Syria#US#Turkey#UN

Jaafari to Schiller Institute: ISIL Has Been There for Centuries/ By Miri Wood