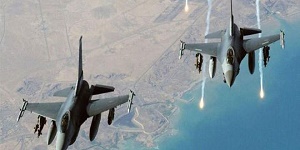 DER EZZOUR,(ST)_ Under the pretext of fighting Isis, war planes belonging to a US led coalition- a coalition formed without UNSC approval- have carried our strikes against al-Rez town in the eastern countryside of Der Ezzour province, killing and injuring many civilians, most of them children and women.

According to local sources, the US-led coalition struck today at dawn homes of citizens in al-Rez town in the east-southern side of Der Ezzour where many civilians were martyred and injured and several homes were demolished.

The sources were quoted on the Syrian News Agency (SANA) as saying that a state of fear and terror spread among the town residents because of the power of explosions resulted from the US strikes.

Under the pretext of fighting Isis, United States leads illegitimate coalition formed without UNSC approval. However, the coalition’s airstrikes target civilians and has committed dozens of massacres and has caused damages to infrastructures and vital establishments.

Terrorist groups in Daraa reject language of settlement for the fourth...

US Coalition of Terrorism Commits War Crimes As Policy By Basma...