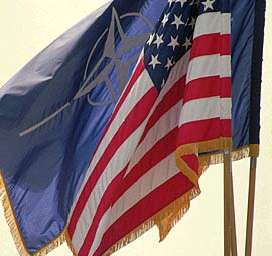 The West and its allies are perpetrating unspeakable yet well-documented crimes against humanity as Washington forges ahead with its pre-planned agenda to destroy non-compliant areas in the Middle East and North Africa (MENA) in favour of its Wahhabi-inspired proxy armies, which include ISIS and al-Qaeda/Jabhat al-Nusra.

US led NATO and its allies, including Wahhabi Saudi Arabia and Apartheid Israel, are perpetuating these crimes beneath ridiculous banners of “humanitarian interventions” and/or the “Global War On Terror” (GWOT).

This rampaging project of deception, death, and destruction follows a predictable colonial script wherein domestic populations are deceived as target countries and their peoples are destroyed and subjugated.

Most of the colonial military strategies are on full display in the terrorist invasion of the democratic Syrian Arab Republic (SAR), led by its reformer president, Bashar al-Assad.

The coercive strategies being used include these:

The end-game is to de-populate and to destroy target countries and to subjugate the remaining population.

A snap-shot of Syria prior to the invasion, helps to illuminate the imperial strategies of destruction.  An article ironically titled “Les crimes de Bashar Al-Assad depuis juin 2000” lists some of Assad’s notable accomplishments:

Assad’s reforms recall those of the Gaddafi government before Libya was destroyed by NATO and its allies.

READ MORE: Report From Syria: “The Terrorists are Criminals and Killers, They Do It for Money”

Professor Tim Anderson explains that the Western terrorists have consistently attacked Syria’s hospitals and that between 2011 and 2013 “they attacked 67 of the country’s 94 national hospitals.

Starvation is another strategy used by colonizers to destroy and subjugate populations. Mir Wood explains in “Syria Dying, UN Cyclops Lying. Still.”  that “ these degenerates are blatantly lying, blaming hunger in Syria that did not exist 5 years ago, on the Syrian government.  The P3 of the UN mafioso clique ‘ambassadors’ (US, UK, France, a.k.a. ‘F*UK*US’) appear to be playing a ball game, volleying ‘siege and starvation,’ ‘starve or surrender’ back and forth, …”

The author noted in an earlier piece  that Western terrorists steal and horde food supplies with a view to inducing starvation and subjugating populations.  Starving populations tend to be more compliant to an occupier’s demands when the occupier controls the food.

The illegal sanctions, are also part of the siege on Syria and its peoples.  23 million Syrians are daily besieged, not only through economic sanctions, but also by terrorists crossing from Turkey, Jordan, Lebanon, and Iraq, reports Syria’s Ambassador to the UN, Dr. Bashar Al-al Ja’afari.

Indiscriminate bombing of civilian populations also serves to subjugate and depopulate populations, and to create internal and external refugees — another Western specialty.  Currently, terrorists are firing Hellfire cannons throughout the industrial city of Aleppo, with great effect.

All of this is happening behind a curtain of lies — another colonial strategy.  The ransacking and destruction of Palmyra, the “Bride Of The Desert” is an attempt to erase Syria’s history, presumably to be replaced by a narrative of Western Wahhabist revisionism.

The strategy of “divide and conquer” is also a staple of colonizers.  Currently, the West is supporting  the Kurdish nationalist Party (PYP) and its military wing (YPG) in their efforts to annex Syrian land and to impose federalism on Syria. If successful, such efforts would serve to weaken Syria and to engineer conflicts between competing factions — another useful colonial tool.

All of these colonial strategies are perpetuating an overseas holocaust as the West overrides international law and topples one government after another with a view to subjugating Iran, Russia, and China as well.

The NATO Axis of Evil needs to be unmasked and held to account for its crimes.  Western governments operating through stealth and deception do not represent the will of the people, nor do they have our informed consent. They have lost their legitimacy.