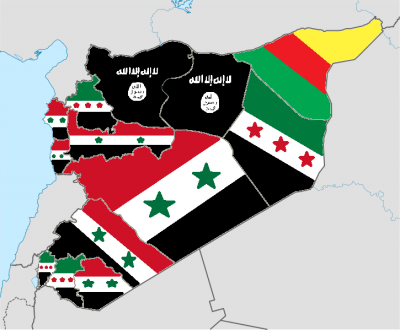 There’s really no excuse for supporting the NATO/terror position. We’ve seen the destruction of Iraq, Libya, Ukraine, now Syria, all built on lies, all beneath the guise of “humanitarian interventions”. Since people with any sense of historical memory can not legitimately plead ignorance, supporters of the terrorist invasion of Syria fall into the category of “fake humanitarians”. They aren’t “progressive” or “left” when they support the criminal violation of Syria’s sovereignty and territorial integrity.

The point for me is to ask why otherwise intelligent people can fall for such shit (referring to a 2015 New Internationalist magazine article: “The forgotten revolution of Syria”), and not once but repeatedly.  It’s not as if Syria is the very first government targeted for regime change by the USA.  It’s not that people are unaware of the fact that the first casualty of war is the truth … there is never a shortage of “leftists” in the West who can be either bought or convinced through incredible naivété, warped political outlook, or Eurocentric arrogance, that the motives of Empire are good.

People such as Ken, who have visited Syria and have seen with their own eyes the devastation wrought by Western-supported terrorists against civilization, have less tolerance for the lies, the propaganda, and the gullible, “fake humanitarians” who enable it all.

Stone doesn’t mince words when he describes some of his on-the-ground observations of Homs, Syria; observations fortified by his historical memory of NATOs imperial destruction elsewhere:Defiant Syria: On A Journey Through Syria, A Canadian Anti-War Activist Discovers The Country’s Resilient Spirit

Judging from the many corpses found buried around the city, some of which were missing eyes and various internal organs, many have speculated that the mercenaries ran a lucrative trade in human organs, besides their human trafficking in Syrian women, boys, and children, and their other rackets such as rapine and pillage … The terrorist organizations were working in accordance with a well-rehearsed imperial script here in Homs.  The KLA, NATOs foot soldiers in Kosovo (formerly part of Yugoslavia) also ran an organ smuggling operation out of a house in Pristina in 1999.

To their detriment, the fake “humanitarians” and pseudo “leftists” are shielded from such on-the-ground realities.

In a later chapter, “Palmyra: Bride Of The Desert”, Stone also bemoans the self-proclaimed “leftists” who cast the Russians as “imperialists” and as guilty as the West in the war against Syria – conveniently forgetting that Russia is legally in Syria, while NATO is not:

“It’s true,” he writes, “that Russia is unfortunately no longer a socialist country.  However, it doesn’t act like an imperialist country either.  Mr. Putin consistently respects the sovereignty of other countries, such as Syria, and speaks up at the United Nations for the observance of international law, which the USA, priding itself as “the exceptional country” and the “sole indispensable country”, tramples on almost every day.”

This resonates with the author’s earlier piece, “Western Hegemony vs Russian Sanity”, and the “Saker’s” observations of the differences between the “Anglo-Zionist Unipolar Imperial Model” and the “Russian Multipolar Model”.

Sustainable evidence demonstrates, for example, that the current Russian multipolar model respects the rule of international law, ideological and cultural pluralism, and the use of military force as a last resort.

The illegal Western war of aggression against Syria, on the other hand, is consistent with the “Anglo-Zionist Unipolar Imperial Model” which defies the rule of international law, negates ideological and cultural pluralism, and uses military violence as a first resort.

The West’s invasion contradicts the rule of international law: Russia is in Syria legally, whereas the West is not; it negates Syria’s ideological and cultural pluralism and seeks to replace with a Wahhabist stooge government or an assortment of stooge governments in balkanized states; and it demonstrates the West’s propensity to use military violence as a first resort – the invasion, after all, was planned well in advance.

Given the fact of the West’s criminality, consistent with the “Anglo-Zionist Unipolar Imperialist Model”, and the concurrent failures of the “fake humanitarians” and the fake “left” to reconcile themselves to evidence-based findings and historical memory, Stone reiterates some concrete steps that should be taken by those of us who support foreign policy trajectories consistent with peace and the rule of international law, rather than the current reality of war and barbarism.

Important steps would include normalizing diplomatic relations with Syria, ending illegal sanctions, withdrawing from all criminal military interventions against Syria, and withdrawing from NATO.

Canada needs to assert an independent foreign policy, and it needs to reject the current barbarity implicit in its status as a vassal appendage of the Anglo-Zionist Unipolar Imperial Model.  This is what Real Change would look like.The original source of this article is Global ResearchCopyright © Mark Taliano, Global Research, 2016

The Truth About Syria – Madelyn Hoffman on Syria, regime change, and the lies of main stream media

The Policy of Creative Chaos: America’s Project for a “Middle-East Holocaust”

Canada Supports The ISIS and Every Other Terrorist Group which is...