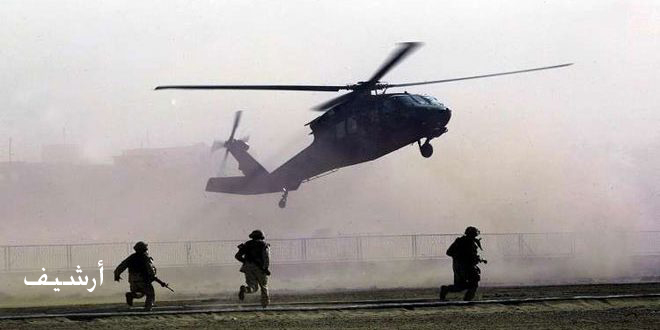 HASAKAH, (ST)_Within the framework of Washington’s investment in terrorism and for prolonging the aggressive war being waged on Syria, the US occupation forces have transported 25 ISIS terrorists from Iraq to Syria.

According to local sources, 25 ISIS terrorists entered from the Iraqi territories on February, 28, 2021, to Al-Sahl town in the southern countryside of Hasakah in Syria under the protection of the US occupation forces.

The terrorists were gathered in Al-Dshesheh point near the above mentioned town before conveying them by US armored cars to the illegal US Camp Al-Bulgar base to the east of Al-Shaddadi city in the southern countryside of Hasakah.

The 25 terrorists  were conveyed yesterday to the Camp Al-Bulgar base and they were transported later by two helicopters to the US base in Al-Shaddadi city and then to the countryside of Der Ezzour.

The sources affirmed that the US occupation forces want to establish small camps to receive and gather ISIS terrorists in them with the aim of bringing them in from Iraq to be sent to areas selected by the US occupation to carry out attacks on the Syrian army’s sites and residential areas and vital utilities  along the Syria Badia.

The US occupation forces supervise the training of terrorist groups in the areas that are under the US occupation, especially in Al-Tanf area at Syrian-Iraqi border, and they offer logistic support and arms to ISIS terrorists..

Among the terrorist groups that are being trained by the US occupation are the so-called ” Jaish Maghawer Al-Thawra” and “Osod Al-Sharqeyeh”.