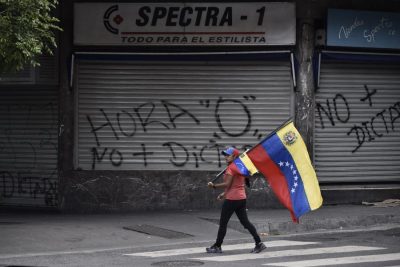 Socialism isn’t the problem. The problem in Venezuela is the cancer of Western-supported deep state agencies that are subverting its political economy for the perceived benefit of a tiny transnational oligarch class.

The same agencies which helped to renovate the post 9/11 Canadian government, by ushering in the Harper Regime[1]— arguably a soft coup – and the on-going coup beneath the progressive veneer of the Trudeau regime, are hard at work in Venezuela.[2]

The Canadian government’s support for Juan Guaido in the name of democracy and freedom is beyond absurd because he has almost no support in Venezuela, and he was not elected to lead the country.

#Maduro got a higher competitive vote and a greater proportion of all possible votes than any of his key detractors: #Trump #Macri #Santos or #Piñera . The plain truth about #Venezuela– Prof. Tim Anderson

Nation-state self-determination, ideological pluralism, democracy, and the rule of international law should be values that Western countries support rather than destroy.

Venezuela and its allies are fighting for us all when they oppose the deep state anti-democratic cancer of lawless imperialism.

[3] Prof. Tim Anderson, “The Unspoken Truth is that America is Supporting Al Qaeda: Heavy Propaganda Rages in the Battle for Aleppo. The Terrorists are Portrayed as « Freedom Fighters ».”Mondialisation.ca, 01 mai 2016. (https://www.mondialisation.ca/the-unspoken-truth-is-that-america-is-supporting-al-qaeda-heavy-propaganda-rages-in-the-battle-for-aleppo-the-terrorists-are-portrayed-as-freedom-fighters/5522594) Accessed 27 January, 2019.

“Walk the Streets of Damascus, and Listen to the People Concerning US Sanctions and Aggression Against Syria”