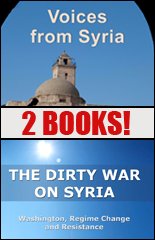 Voices from Syria by Mark Taliano and The Dirty War on Syria by Tim Anderson: Purchase these two essential books on Syria for one low price.

*SPECIAL OFFER: Voices from Syria + The Dirty War on Syria

Voices from Syria, by Mark Taliano

Mark Taliano talks and listens to the people of Syria. He reveals the courage and resilience of a Nation and its people in their day to day lives, after more that six years of US-NATO sponsored terrorism.

“Syria is an ancient land with a proud and forward-looking people, to which we sent mercenaries, hatred, bloodshed and destruction.

Mark Taliano exposes the barbarity of Washington’s latest regime change aspirations. The West’s political spin is laid bare in the words of the Syrian people.

Canadian Mark Taliano has brought together an excellent mix of anecdotes and analysis to create a very accessible short book on the terrible Syrian conflict. It should serve as a primer for all those who feel curious, dissatisfied or cheated by the near monolithic war chorus of the western corporate media.

Mark is one of those few westerners who took the trouble to travel to Syria during this war, to talk to Syrians of all ranks and see for himself the human reality of this country which, in 2011, became the latest target of the Washington-led coalition.He deftly mixes stories from soldiers, doctors, politicians, clerics and ordinary citizens with his prior reading. That reading includes the invaluable insights of a new generation of investigative journalists, in particular Eva Bartlett and Vanessa Beeley. Start with Mark’s first chapter ‘In Their Own Voices’ and you won’t put it down. He humanises the Syrian people, their culture and their nation in a way that is normally not permitted at wartime.

The Dirty War on Syria: Washington, Regime Change and Resistance, by Tim Anderson

The Dirty War on Syria has relied on a level of mass disinformation not seen in living memory. In seeking ‘regime change’ the big powers sought to hide their hand, using proxy armies of ‘Islamists’, demonising the Syrian Government and constantly accusing it of atrocities. In this way Syrian President Bashar al Assad, a mild-mannered eye doctor, became the new evil in the world.

As western peoples we have been particularly deceived by this dirty war, reverting to our worst traditions of intervention, racial prejudice and poor reflection on our own histories. This book tries to tell its story while rescuing some of the better western traditions: the use of reason, ethical principle and the search for independent evidence.

Tim Anderson  has written the best systematic critique of western fabrications justifying the war against the Assad government. No other text brings together all the major accusations and their effective refutation. This text is essential reading for all peace and justice activists.

Anderson’s excellent book is required reading for those wanting to know the true story of the imperialist proxy war waged on Syria by the U.S. and its Western and Middle Eastern puppet states. This account could also be titled “How to Destroy a Country and Lie About it”. Of course Syria is only one in a long line of countries destroyed by Washington in the Middle East and all over the Global South for more than a century.

Anderson’s analysis is particularly useful for dissecting the propaganda war waged by the U.S. to hide its active support for the vicious Islamic fundamentalists it is using in Syria. In spreading this propaganda the U.S. has been aided not only by the West’s mainstream press but also by its prominent so-called human rights organizations.

*SPECIAL OFFER: Voices from Syria + The Dirty War on Syria

Western Support for ISIS in Pictures/ By Prof Anderson

International Women’s Day: Syria says YES to Women, and NO to...