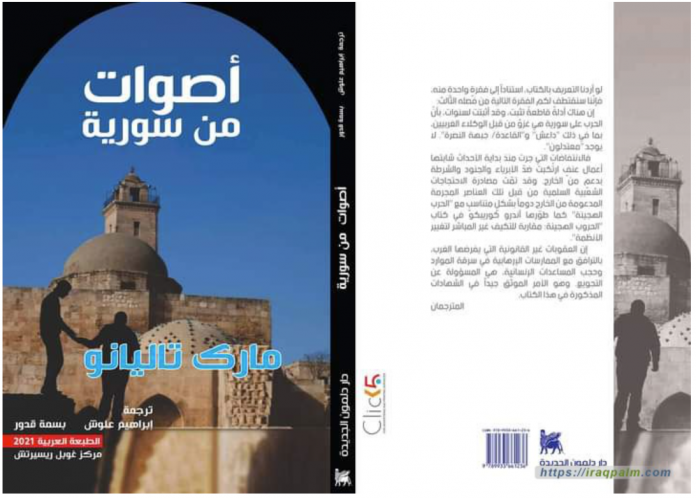 In the introduction of the translators to the Arabic edition, we read: In the book “Voices from Syria”, which we put in the hands of the Syrian and Arab reader here, we discover a complete media front in the West written by Mark Taliano and others, often talked about by Taliano and extracted from them, and they fight for years a battle to defend Syria in front of Western public opinion in the face of a dominant media machine run by the enemies of Syria. “Voices from Syria” is addressed to a Western audience, addressing its sensitivities, but begins his speech in the words of Syrians, providing testimonies to them about their bitter experience in the war at the hands of Western-backed terrorism, their steadfastness and their arrogance under siege and economic terrorism.

Perhaps the reader’s mind as he turns the front pages of “Voices from Syria” that his author Mark Taliano addresses the heart and conscience of westerners only, to quickly discover, as he dives between the two rudders of the book, that Taliano soon moves after the testimonies of the Syrians, and in the midst of it, to frame the theory of the war on Syria linking it to the international strategies of the project of imperial hegemony over the world and the tools of the wars of the fourth generation, and in that particular context presents Taliano Syria as a study case within its broader framework as part of the global war against independent states and movements to be subjected, highlighting the socio-economic levers of that war in the Western system itself: international financial capital, large cross-border companies, the mechanism of action of that system in independent states, and the agents of those levers in the region in which Syria is located, whether they are regimes, takfiri groups or non-governmental organizations.

Moving between the general context and the special contexts of the war in Syria, Mark Taliano begins to dismantle the system of media statements used to justify the “regime change” project in Syria one by one, starting with allegations of “shooting peaceful demonstrators”, “Assad kills his people”, children Omran, “Tyre Caesar”, eastern Aleppo, Daraa, chemical weapons, etc. Down to the so-called “war on terror” and the West’s claims to defend democracy, human rights and Syrian refugees, to the direct and indirect support provided by the West and its allies to terrorists in Syria, which Taliano documents well.

In this regard, Taliano links the contexts of the siege and invasion of Iraq and Libya with the direct and indirect American wars in the world, on the one hand, and what happened in Syria on the other, to conclude in the end the image of the project “The New Middle East”, which represents the Zionist entity at its center, which is in this way more advanced and deeper than many Western progressives whom Taliano bitterly criticizes for their liberalism and their drift behind imperialist propaganda and turn them into a front for it effectively.

Taliano presents here a different Western left-wing model open to our civilization and culture, which is in fact a model that employs its analytical tools capable of reading the contradictions of real global reality and its political economy as it is, which makes it line up with the conviction of the knowledgeable and confident with impressive principled stability, which makes him present his point of view systematically interconnected and well documented.

He can also see who reads the book, based on various preliminary sources that present it as it often does without any interference, which also gives a spontaneous tinge to the book, but not only those sources, but delves deep into Western documents, particularly intelligence from which they have been officially published or leaked through WikiLeaks documents.

On the 10th anniversary of the start of the cosmic war on Syria, we present you with a further and revised Arabic translation of Mark Taliano’s book Voices from Syria, which will be published in English in conjunction with Arabic, and the first English edition was published in 2016, as the generous reader will note from the text.

Finally, if we want to introduce the book, based on one paragraph of it, we will extract the following paragraph from its third chapter: there is conclusive evidence that, for years, war is an invasion by Western agents, including “Da’i.s” and “Bottom.d/Text Front.” The uprisings that have taken place since the beginning of the events have been marred by violence against innocent people, soldiers and police with the support of the outside. The illegal sanctions imposed by the West, together with terrorist practices in stealing resources and withholding humanitarian aid, are responsible for starvation.

MP Fares Shehabi on the “true, real, and only Syrian Civil...