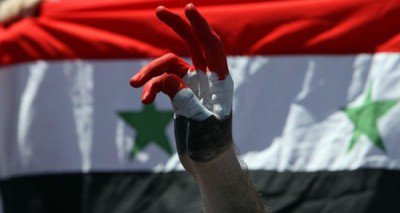 “We give our blood to keep this country”.

Ali Haifa is the director of Mhardeh power station, in Northern Hama, besieged by various extremist armed gangs until the recent SAA liberation of this province – he is a hero, a humble hero who embodies the reason that #Syria has resisted such a brutal, violent sectarian war waged against them by tens of hostile states, for almost 10 years – twice the length of World War 2.

People like Ali are everywhere in Syria – the ordinary people who refuse to allow their country to be desecrated, destroyed by backward thinking monsters promoted by the West, armed and financed by a multitude of criminal rogue states.

I will be writing a full report but I asked Ali to give a short message to the people in the West about the suffering that his homeland has endured during this war, forced upon them by the hegemons that prey upon smaller, progressive and heritage-rich nations.

Ali can only be described as a gentle giant of a soul. He told me stories of his bravery and courage under fire, battling the flames of burning fuel tanks after the Jaish Al Izza and various other sectarian, armed gangs had targeted the plant that supplies much of Syria with electricity. Deliberate targeting of essential civilian infrastructure is a war crime.

When i told him, he is quite simply a hero, he smiled and said:

“This is my duty, I would do everything for my country and my people”

Please do listen to this simple and short message from a man who has survived hell, literally. He deserves to be heard.

The West and its Allies are the Brutal Dictators, not President...