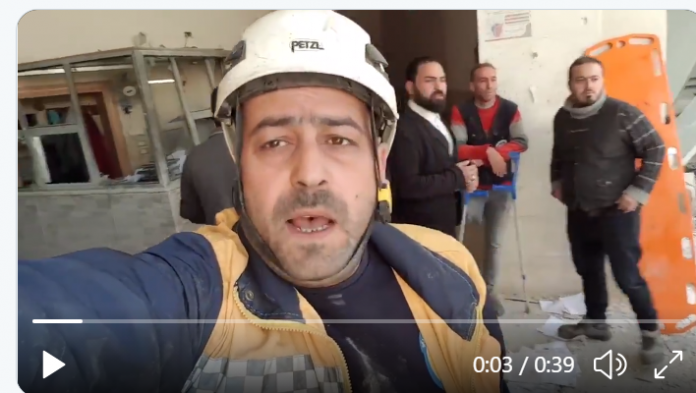 As legacy media again bleat the unsubstantiated “Syria is bombing hospitals” chorus of its war propaganda songbook, let’s pause to review the relatively unknown (but verifiable) reality of terrorists bombing hospitals in Syria.

Following recent allegations of a hospital being targeted Al Atarib, western Aleppo, the US State Department repeated the claim, in spite of any clear evidence to back it up.

Instead, reports rely on highly questionable sources like the White Helmets, the USAID-funded Syrian American Medical Society and the usual unnamed “witnesses” and (clearly impartial!) “rebel sources,” as per a Reuters’ report on the recent claims.

In fact, Reuters even acknowledges being unable to verify the authenticity of videos purporting to show “a ward damaged and civil defence rescuers carrying bloodstained patients outside.”

Let’s recall that Idlib is occupied by Al-Qaeda in Syria – a fact emphasized (as I wrote) by the US’ own former special envoy, Brett McGurk, who deemed the northwestern Syrian province the “largest Al-Qaeda safe-haven since 9/11.”

The presence of Al-Qaeda and affiliated terrorist groups makes it impossible for independent, neutral bodies to assess what is going on.

Facts matter, they say. But really, not so much when it comes to war propaganda.

In Sarmada, Idlib countryside, one of the targets was a Tahrir al-Sham (Al-Qaeda in Syria) fuel market, the smuggled fuel tankers obliterated.

A White Helmets video supposedly filmed in Al-Atarib alleges a hospital was bombed there. It indeed shows what looks like a medical facility covered in dust, and a lot of bulky men of fighting age. Glaringly absent are women or normal looking civilians.

Given the White Helmets’ penchant for working only in areas controlled by terrorist factions, working with them and even numbering among them, dabbling in organ trade, and having lied many times in the past, the video proves nothing.

There is, on the other hand, a precedent for “hospitals” or medical centres being weaponized by terrorists. And not just once or twice, but repeatedly in terrorist-occupied areas throughout Syria.

I’ve seen them in Aleppo and eastern Ghouta.

The Eye and Childrens’ Hospitals, a large complex in eastern Aleppo, was militarized and occupied by terrorists including the Tawhid Brigade, Al-Qaeda and even IS (Islamic State, formerly ISIS). Prisoners were held, and tortured, in nightmarish prisons and solitary confinement cells deep below.

As journalist Vanessa Beeley noted, in eastern Ghouta, medical centres, “provided treatment almost exclusively to extremist armed factions.” They were also built underground, “linked by a vast maze of tunnels that snaked below most of the districts controlled by the armed groups, providing cover for the fighters during SAA [Syrian Arab Army] military campaigns.” (An aside, see one of these massive tunnels in Douma, at the location of the underground “hospital.”)

In Idlib, a “hospital” that the New York Times claimed Russian warplanes bombed in May 2019 was a cave used as a terrorist headquarters. Another fortified cave in Khan Sheikhoun was well-stocked with weapons, medical supplies and gas masks, and a prison with solitary confinement cells.

In areas liberated from terrorists, the Syrian Army routinely finds such caves, with tunnels connecting terrorist bases so they can avoid moving above ground.

In the past, Russia has provided satellite imagery when the question of a building allegedly being bombed arose. Until we have conclusive evidence either way, it is a question of he said, she said, although common sense (and the history of such lies) points to more media fabrications.

Since the media and pundits clearly care so much about Syrian hospitals being bombed, and even destroyed, it’s worth reviewing some of the major hospitals damaged or destroyed by terrorist factions.

However, unsurprisingly, not a lot of information is available. The following is a partial list, with me filling in details from attacked hospitals that I have gone to.

I went to Aleppo in July 2016 and spoke with the director, who confirmed his hospital was gutted in the blast, and noted that a week later terrorists’ mortars hit the roof of the hospital, destroying the roof and injuring construction workers.

In May 2018, before Daraa was fully liberated, I went to areas which were under fire from terrorists (including the day I went), and took a perilous high speed ride in the taxi I had hired in Damascus to the state hospital, down a road exposed to terrorist sniping from less than 100 metres away.

The hospital was battered and partially destroyed from terrorists’ mortars, and mostly empty of patients. The director showed me destroyed wards (dialysis and laboratory), and off-limits areas due to high risk of sniping (gynecology, operations, blood bank, nursing school, children’s hospital).

When I returned to Daraa in September, after the region was liberated, the hospital was full of patients, since it was finally possible to access without risk.

Behind the hospital, roughly 50 metres away, I saw a building when I was told had been occupied by terrorists. Hence the extreme risk of being sniped while inside the hospital.

I never saw any Western outlet speak of this hospital, although it serviced civilians and was quite visibly partially destroyed.

In November 2016, I met Dr. Ibrahim Hadid, former Director of Kindi Hospital, who said that he wanted medical colleagues and institutions to exert some of the concern they have for “hospitals” allegedly bombed in terrorist areas.

They, and Western corporate media, have done the opposite, of course.

Another chemical song and dance routine?

Meanwhile, Russia is warning of a possible new staged chemical provocation by Tahrir al-Sham in Idlib.

The Russian Center for Reconciliation says, “militants are plotting to stage a fake chemical attack near the settlement of Qitian,” to again accuse the Syrian government of using chemicals on the people.

As anyone following the war on Syria knows, although the West desperately wants to prove Syria committed one or more chemical attacks, it has failed, to the point where even OPCW experts spoke out, contradicting the claims.

As I wrote last week, in spite of incessantly lying about Syria for ten years, Western (and Gulf) media, pundits and politicians steam ahead with more lies – recycled accusations and war propaganda.

So, it is likely the “hospitals bombed” theme will surge anew, and then the “chemical attacks” theme. And then maybe we’ll have another new Bana al-Abed to ask Biden to bomb Syria or “holocaust” Idlib…

On and on it goes, ceaseless war propaganda.

The irony is of course, as I feel the need to make clear nearly every time I write, those script-readers claiming that Syria (and Russia) are bombing hospitals, or using chemicals, or whatever lie is next recycled, don’t actually care about the lives of Syrians.

If they did, they would stop whitewashing terrorism in Syria, aid the country and its allies in liberating Idlib and the Aleppo countryside, stop pillaging its oil, leave Syria, and lift the sanctions.

Eva Bartlett is a Canadian independent journalist and activist. She has spent years on the ground covering conflict zones in the Middle East, especially in Syria and Palestine (where she lived for nearly four years). Follow her on Twitter @EvaKBartlett

She is a frequent contributor to Global Research

Featured image is from Syria Times

Idlib and NATO’s War of Terror against the Syrian People

A Tale Of Two Hospitals: Fabricated Bombing Incident vs. Open Terrorist Targeting Of Facilities In Aleppo?