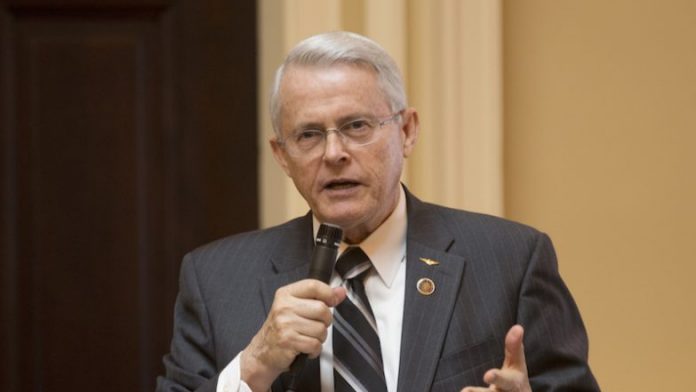 America would be wise to continue cutting its losses across the Middle East. It could start by normalizing relations with Syria, ending sanctions, and withdrawing U.S. troops from their sovereign territory.

This is what the Retired Virginia state senator Richard Black has said in an interview with the Syria Times e-newspaper.  “Syria is helping us by battling the greatest army of al Qaeda terrorists on earth in Idlib Province. And since “the enemy of my enemy is my friend,” it’s time we asked, just who is our friend, Syria . . . or al Qaeda?”, the retired senator added.

He asserted that the Obama-Biden administration bears heavy responsibility for institutionalizing never-ending wars and extending them into Libya, Syria, and Yemen.

Asked about the reperucussions of the Taliban’s capture of Afghanistan, the retired senator replied: “The fall of Afghanistan is a damaging blow to the American deep state, which thrives on a continuous state of warfare. Before he ordered the withdrawal from Afghanistan, President Biden could do no wrong; the press suppressed negative news about him. But now, the media are lashing out with a vengeance, causing his popularity to plummet.”

He went on to say: “ War hawks have warned that al Qaeda may reemerge in Afghanistan. Their claim rings hollow, since the U.S. has been an unwavering supporter of al Qaeda in Syria throughout the Syrian War. Under CIA Project Timber Sycamore, the U.S. channeled vast quantities of anti-tank and anti-air missiles to al Qaeda affiliates there. To this day, the U.S. actively supports the largest concentration of al Qaeda fighters on earth in Syria’s Idlib Province. It is outrageous to suggest that the U.S. is genuinely concerned that al Qaeda might reconstitute in Afghanistan, when we are their principal sponsors in Syria.”

According to Sen. Black, the fall of Kabul was quite unlike the violent and bloody collapse of Saigon. While the South Vietnamese fought desperately for many years, the Afghan army simply dissolved. In one case, six Taliban fighters took control of an entire province of 60,000.

“The worst reported war crime was the execution of 22 surrendering Afghan commandos on June 16th.  There are scattered reports of executions, beheadings and forced marriages, and Amnesty International reported horrific murders of nine Hazara men a month before the fall of Kabul. To date, however, war crimes and reprisals have not been widely reported, though additional reports may surface over time.”

He made it clear that contrary to popular opinion, the Taliban are not a monolithic force. They are severely overstretched, with 100,000 troops occupying a mountainous nation of 38 million people. Their support among the Afghan people is spotty. They are unpopular in vital cosmopolitan centers, where demonstrations against them have erupted several times.

No crowds of elated supporters lined the streets, celebrating Taliban victory. The Taliban themselves do not appear exuberant. Rather, they look a bit confused and overwhelmed by it all. They lack self-confidence because they lack the support of the people. They are anxious to quell fears of retribution among the public and international observers. No doubt the sudden collapse of social order will facilitate crime but reports of widespread atrocities are less common than expected.

Since most news reports originate from the capital of Kabul, however, Taliban misconduct may eventually prove worse as reports emerge from the hinterlands.  Afghanistan has never been a cohesive, stable nation. It has always been a country of diverse tribal regions, competing militarily with one another.

The retired senator believes that it is unlikely that the Taliban will be able to effectively unify the country. Just days after the Taliban occupied the capital, insurgents drove them from several mountainous districts north of the capital. The Taliban’s overstretched forces will have difficulty maintaining control of such areas.

In cities, groups of women have already staged remarkable demonstrations of solidarity with the former Afghan government and have marched against the reimposition of oppressive Sharia law. Many citizens are refusing to fly the Taliban’s white banner, insisting that the Afghan flag is the true flag of the nation. Such actions would be unthinkable if the Taliban enjoyed widespread public support.

The Afghan economy is in a shambles. Inflation is rising, banks are closed, money transfers from abroad have been suspended, and its currency is in freefall. The country is essentially a welfare state, and the end of foreign aid may cause millions to go hungry. An economic collapse looks likely, and that will severely undermine the Taliban grip on power.

At this early stage, we can only speculate about the future of Afghanistan under the Taliban. The exigencies of governing may curb their brutal tendencies. They will be forced to compromise in order to have any hope of remaining in power.

Although the Taliban are now deemed terrorists by the UN, they will probably achieve recognition in due course. If they establish a functional government and prove that they can govern effectively, the UN will respond appropriately.

“The Deep State’s Potemkin village has vanished, and the price in American credibility will be steep,” the retired senator emphasized, referring to the fact that ending wars is messy, but it must be done. On Thursday, more than 100 people were killed, including at least 13 U.S. service members and 90 Afghans when two blasts hit the Kabul airport .