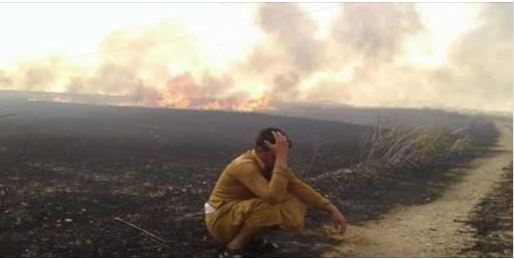 Where are the global protests about the American coalition proxy torching of crops in #Syria? Mass murder, economic siege, displacement, starvation not worthy of riots?

Oh, I forgot, the media didn’t amplify these US state sanctioned crimes against humanity, so …

LOOK at these flames and, just for one minute, imagine its your home, your livelihood, your FOOD for the next 12 months. Syria has been under lockdown for 10 hellish years, imposed by the same ffffing governments you are all screaming at.

Why no scream for Syria?

Why the silence, apart from the besieged, smeared and maligned few that were demonised by the anti anti-war pseudo left, because the “left” were told to do that by the same media telling them to defy fake “pandemic” Covid-19 to protest “Floyd” literally days after the same media was calling you a psychopath if you didn’t distance socially and voluntarily muzzle yourselves.

Part of the fires around Tal Abyad in Eastern Euphrates area, from Ibrahim Mohammad.

Canada Killing and Maiming Its Own People With Experimental Injections