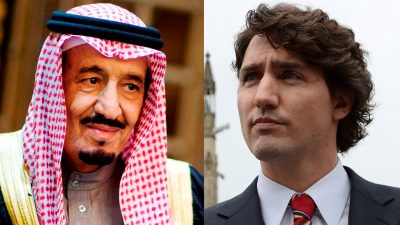 Syrian women are helping to save Syria and all of humanity against the scourge of Western-supported terrorism.

The Canadian government, on the other hand, is destroying women’s rights (and all human rights) in Syria and beyond.  If the truth were ever accepted by broad-based populations, then our government, led by those who project progressive fronts, would be exposed as the misogynist, life-hating rot that it is.

Trudeau is destroying Syria through illegal sanctions, and through direct and indirect support of every single terrorist in Syria. Canada is a member of the NATO terror organization, which along with its allies, seeks to create “regime change” in Syria, — the highest crime according to Nuremburg Principles.

All Syrians, but especially Syrian women, have much to lose if the Canadian government’s diabolical ambitions are realized.

“the government supports women’s right and liberty before and now. We have the liberty to choose our work , to wear whatever we like , to choose the type of education we want and even to fight side by side with the army. We have the safety to go at anytime during day or night.”

She also explains that

“men now are busy fighting with the army or trying hard to work double shift after the crazy raise of prices and after the sanctions. Women’s life as the life of all Syrian has been affected badly by the sanctions. The prices of food and vegetables have become double. Medicine prices are very high and some are not available.”

Life in terrorist-occupied areas, however, is entirely different, and alien to Syria and to most Syrians. Ashy explains that

“women in the areas controlled by the US- backed terrorists have no rights at all. They have to wear a black uniforms to cover their bodies and this uniform must be very simple and loose and if any women try to break their rules they take them to Hespah (prison). They keep them imprisoned for hours and force them to buy a uniform that they have and agree on … Women are prevented from going to schools or working any kind of job that they don’t approve of.”

Ashy adds that the government respects freedom of thinking and religion and that nobody has the right to interfere in someone’s religion.

Saudi Arabia, one of Canada’s allies in the war for terrorism and against human rights is both a fountainhead of terrorism and Wahhabism, and it is this Wahhabi ideology that prevails in terrorist-occupied areas of Syria.  It is also this Wahhabi ideology (takfiri/salafi) that is referenced in a 2012 DIA document[2] (14-L-0052/DIA/287) which laid out clearly the West’s plans to destroy Syria, one of the 7 countries targeted for destruction as enumerated by General Wesley Clark.

As the U.S and its terrorist allies occupy the oil rich areas of Eastern Syria – also laid out in the aforementioned DIA document — Canadians should remember that this war, like its predecessors in Libya, Iraq and beyond, was sold to them and continues to be sold to them through outrageous, constantly repeated, war lies.

[1]Amany Ashy is a pseudonym for an actual Syrian source. She shared her narrative in a private Facebook message dated 2 October, 2017.